Up for the count 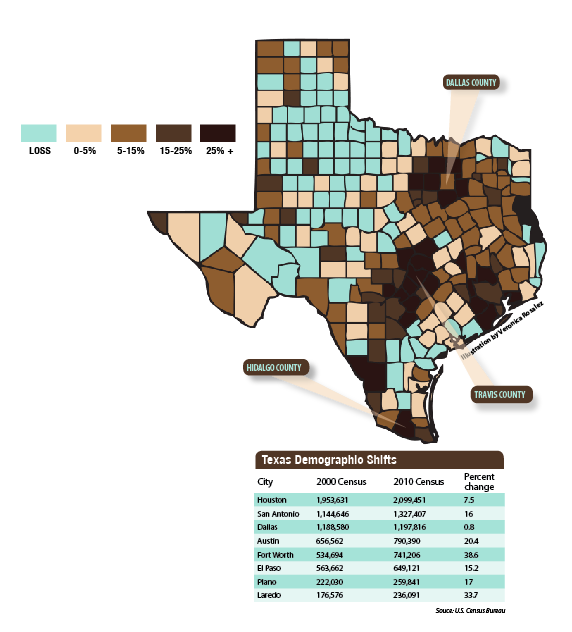 Census data released Thursday verifies what most Texans already know — in the last 10 years, the state has seen a huge population boom and dramatic demographic shifts.

“The data verifies that the Austin metropolitan region has been nothing short of an extremely rapidly growing region, in terms of its population gained over the last 10 years,” said city of Austin demographer Ryan Robinson. “Totals are all a little bit above what everyone thought they would be.”

Robinson said demographers expected the 2010 population to be about 785,000 people. The Hispanic population grew more than any other ethnic group and now makes up 35.1 percent of the city total, about 250,000. Austin is now a majority-minority city, meaning that the non-Hispanic white population is less than 50 percent of the total.

“Within the city of Austin, Hispanics now make up more than 35 percent of the population, five percentage points higher than in 2000,” Robinson said. “It shows that we have diversified significantly from a racial and ethnic standpoint. Anybody who lives here knows that.”

Sociology professor Jacqueline Angel said the state’s additional four million people translates into higher costs for state agencies that assist students, low-income people, the young and the elderly. That means the state Legislature will now have to figure out how to address the increasing cost of state programs like Medicare, Medicaid and education, she said.

“The growing number of younger and older people are going to need a lot of support to compete in a global economy,” Angel said. “The 2010 Census has very important political implications for our state’s future.”

With increasing student populations, she said University tuition rates are likely to increase to compensate for the increased costs of providing higher education to more people.

“This increase is going to put pressure on the state to fund all of our programs,” she said. “More students are going to be demanding higher-educational opportunities, but they may not be able to come to flagship universities because of the lack of availability of openings because enrollment numbers are just exceeding capacity nationwide. How we respond to that is where our political leadership matters.”

As a result of the increase in population reflected in the Census count, Texas gained four seats in the U.S. House of Representatives in December, bringing the total to 36 representatives. The release of Census data also marks the beginning of state redistricting — the process of redrawing district lines for state and national legislative seats.

Texas Legislative Council spokeswoman Anna Abraham said the population data will be input into a redistricting application for lawmakers to begin to outline proposed district boundaries by next week.

“We have some computers set up here in the office with the software so that anyone from the general public can take a stab at making their own maps, or if there are any maps that have been released as open records, they can also play with that,” Abraham said. “Or they can just look at how things are right now.”