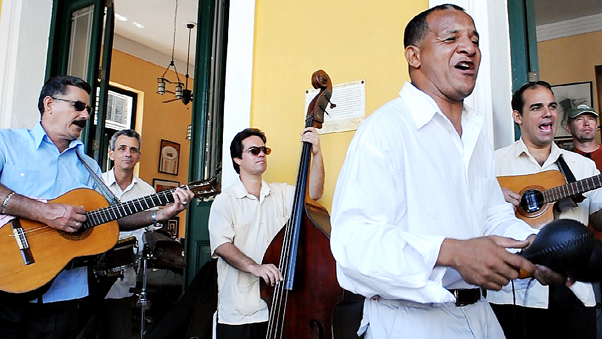 Musicians play Cuban music in the style of the Buena Vista Social Club at the Taberna de La Muralla. Microbrewery patrons can listen to live music and look out at Plaza Vieja while drinking from a three-liter cylinder full of beer.

Our plane touches down on bumpy tarmac and docks with a gray claustrophobic terminal. Outside, there are very few lights and even fewer cars. A few small lampposts with fluorescent blue and white lighting struggle against the ominous night. Back in the terminal, a PA system screams what sounds like looped propaganda messages. One of our passports has been confiscated, and we haven’t even left the airport. A cold dose of realism settles in.

We planned our trip to Havana, Cuba, in a naive and senseless manner, mostly prompted by the fact the island is off-limits to Americans and permanent residents. Claire and I had no plans and no real concept of the country we were going to stay in. All we knew is we wanted to go, so on Tuesday, March 15, we packed a bag and left. Because we missed our first flight from Mexico City, we only have two days to spend in Cuba.

Despite the months we spent dreaming of the country, reinforcing our desires to visit the secluded and vilified island, we didn’t actually start booking flights and finding a place to stay until roughly 72 hours before spring break. Lesson learned. And now we are in José Martí International Airport faced with the most antipathetic welcome committee either of us ever experienced.

Clusters of khaki-wearing immigration agents surround a red and white wall comprised of cloistered booths: Cuban Immigration. At 11:20 p.m., there are more immigration and police officers in the airport than passengers, and they survey the motley crew of 50 who just touched down from Panama City. Claire and I are among them, exhausted, headed straight toward the wall of booths. I try not to make eye contact with anyone. Claire is behind me. Unease creeps in. From the United States’ perspective, we are entering Cuba illegally. We are not Cuban-American and the embargo prohibits free travel to the island without approved federal passes. We do not have these passes. We are hoping the Cuban government won’t mind.

We are allowed through, but immediately there is a problem.

A burly immigration officer, one of maybe 30 lingering near the baggage claim, sweeps in, confronts Claire, takes her American passport, puts it in his pocket and walks off without acknowledging our questions. The radio on his shoulder crackles with the door number another passenger walked through. Those manning the immigration booths must have tipped them off.

We follow who we think is another American wearing a huge Nikon camera with a telephoto lens being led aside for questioning. There, I ask, in my best Spanish and with as much authority I can summon, “Quién tiene su pasaporte.”

Struggling between broken English and Spanish, we too get pulled aside for questioning. Both our passports now held hostage, we are interrogated in the middle of a squat hall about where we are staying, what we are studying (they don’t take kindly to journalists, even students) and who we are going to see. We tell the agent we are staying at a local hotel.

U.S.-Cuba relations have not been cordial since the Cuban Revolution in 1959, and the government has a tenuous relationship with foreign press, said Reuters Cuban bureau chief Jeff Franks, who we would later meet during our stay.

In the past week, relations have deteriorated after the Cuban government sentenced American Alan Gross to 15 years in prison for allegedly distributing cellphones and computers to members of the Jewish community in Cuba. The Cuban government said distributing the phones constituted “acts against the independence and territorial integrity of the state.”

While there are no apparent travel restrictions once you are on the island, the Cuban government wants to know the addresses of where every person traveling into the country will stay. No one on the island can harbor foreign nationals, even tourists such as ourselves, without authority from the Cuban government and without charging money. Hotels are expensive, so we found a host home online to take us in, but we don’t know whether they have the government pass to house us.

After 15 minutes of questioning, we pass through, collect our passports and our visas and shuffle toward the exit. A cab drops us off shortly afterward in Havana’s Vedado neighborhood, three blocks away from the Malecón, the city’s sea wall. Vedado is one of Havana’s more affluent neighborhoods. In this part of town, roughly five miles from the old city center, streets are shaded by huge trees, homes are pastel-colored and often three or four stories tall. They could look like palaces if they were in better condition, a fact of life for most of Havana.

Entire blocks of the city are in ruin, and some structures that appear barely standing house multiple families. At night, the city’s vacant, often darkened streets are foreboding. The old quarters of the city act like mazes and with no street signs or addresses. It’s very easy to get lost.

Cuba has a dual currency system, a lesser money, the peso cubano, and a much more valuable currency, the Cuban convertible peso or CUC as it is called. Most Cubans’ salaries are paid in peso cubanos, but many of the island’s goods, including gasoline, require the CUC. As of March 15, $1 USD is equal to one CUC, or about 24 peso cubano. Most Cubans, therefore, live in poverty. The woman we stayed with, an artist and writer, gets paid 20 peso cubanos a month — less than $1 USD.

We stand outside, unsure which door to knock on. Thankfully, our hostess Aries was expecting us. We climb the four stories to our room and hatch a quick plan to go the beach the next day.

We wake up to the sounds of a rooster in the small alley next to our house. After yogurt and strong coffee, we head out with four students from Colombia also staying in the same complex. Together we venture into a book store stocked with communist, Marxist and socialist histories of the Cuban Revolution. I especially want a copy of “Granma,” the Cuban equivalent of the Chinese little red book, but sadly, the shop doesn’t carry it. From there, we visit the old historical center of Havana and stop for a drink at a microbrewery.

Throughout Havana, anti-America and pro-Cuban propaganda from the revolution still plasters the walls, billboards and buildings. In a 30-minute taxi ride to Santa María del Mar, one of several beaches that make up the Playas del Este east of Havana, we pass billboards in Spanish detailing the cost of the U.S. embargo on the Cuban people — “Two hours of the blockade amount to all braille machinery needed for the blind of the country.”

The U.S. imposed the embargo on Cuba in October 1960 after Fidel Castro started a one-party communist system on the island and nationalized property owned by U.S. citizens and corporations a year earlier. Associated Press estimates from 2007 put the cost of the embargo on Cuba at more than $89 billion in the 45 years since it began.

After watching the sunset from the Malecón, we get lost in Old Havana before taking a cab to a jazz club located on the top floor of a decommissioned shopping center. Moments later we are invited for rum at a street-side bar and walk out with a box of 50 Cuban cigars, which will later pass unnoticed through customs in three countries.

The next day we venture back into Old Havana and eat lunch at La Bodeguita del Medio, a small bar and restaurant famous for being Ernest Hemingway’s favorite spot for mojitos. Later that afternoon, we join Jeff Franks, the Reuters chief, at his office and walk to Hotel Nacional for drinks and cigars on a patio overlooking Havana Bay. The city looks almost frozen in time — American cars dating as far back as the 1940s still run as if in their prime. If it weren’t for the ever-present immigration officers on every other street corner, you could almost forget there ever was a revolution.

Franks takes us to Atelier, the newest private, family-owned restaurant in Havana, where we dine on rabbit, shrimp and beef with multiple glasses of wine. These paladares are part of the government’s plan to make more Cubans self-sufficient. In return, restaurant owners pay high taxes. The atmosphere of the restaurant is like a Midtown New York bistro. Toward the end of our meal, Franks introduces us the Norwegian ambassador and his entourage, and they treat us to several glasses of rum.

We get back to the house around midnight, pack our bags and say our goodbyes before the cab arrives at 3 a.m. to take us to the airport for a 6 a.m. flight. We were only in Cuba long enough to get a brief glimpse at life on the island. Barely back in the routine of things in Austin, we are already planning our return.

Havana is a city that teeters on the edge of life and decay. It’s an alluring place that is both inviting and cold. The two days we spent in Havana remain for us a very surreal experience. It would be presumptuous to think that at the end of this journey we would have some sort of mental or spiritual awakening.

Maybe the whole experience is still incubating, but it almost feels as if we never really left the island. We still feel the jagged rocks below the Malecón, smell the spice in the air and hear the ever-present salsa music from every passing radio.
We catch ourselves day-dreaming about what the people we met along this journey are doing, and then we realize we haven’t seen anything of Cuba. The island remains very much a mystery. Our wanderlust is quenched, but not satisfied.