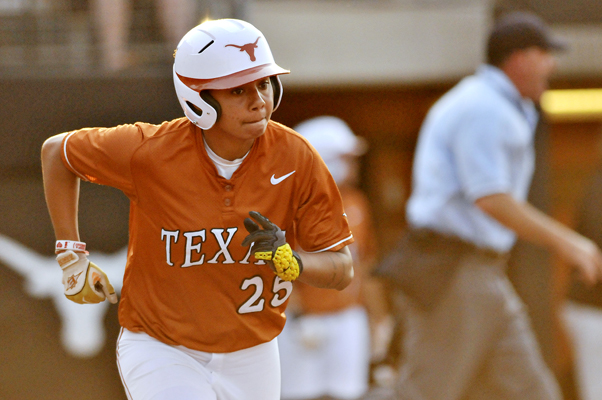 Courtney Craig takes her time running the bases after hitting one of her two home runs in Texas 8-0 win on Tuesday. The junior turned in her second career multiple homer performance as she picked up the scoring slack for the Longhorns in the wake of Lexy Bennetts injury.

However, an early season injury benched the California native for most of nonconference play. So far this season, junior first baseman Lexy Bennett has been headlining the Texas offense, but after she sustained an injury this past weekend, the Longhorns needed someone to step up.

In the Longhorns’ 8-0 shutout of the UT-Arlington Mavericks on Tuesday, junior Courtney Craig went 3-3, connected for two home runs and had four RBIs. This marked the second multiple home run game of her career. Craig is now tied for sixth on the Texas career home runs record list.

“It means a lot with her being able to come back, because she was one of the best hitters last year, and we need that in the Big 12,” said freshman Brejae Washington. “It makes the team really confident with her being in the lineup.”

Although Craig started as the designated hitter on Tuesday, she came in to play left field early in the game. While on defense, she made several key plays that allowed sophomore starting pitcher Blaire Luna to relax in the circle. Despite her contributions in the field, her offensive performance was what she was most excited about.

Craig also admitted that her performance at the plate Tuesday evening was not all a result of talent. She employed a different mindset going into the game.

Head coach Connie Clark said it was not a coincidence that the Texas offense, and most notably Craig, stepped up to replace Bennett. Before the game, the team discussed that the entire team needed to step up to replace what Bennett was able to do both on defense and at the plate. Craig, who is getting back to full range of ability after her injury, really took that to heart.

“It was Courtney that was hurt, and now she’s really starting to feel 100 percent and see the ball well and get more at-bats under her belt,” said Clark. “It is obviously great timing and we need it. She is looking really good.”