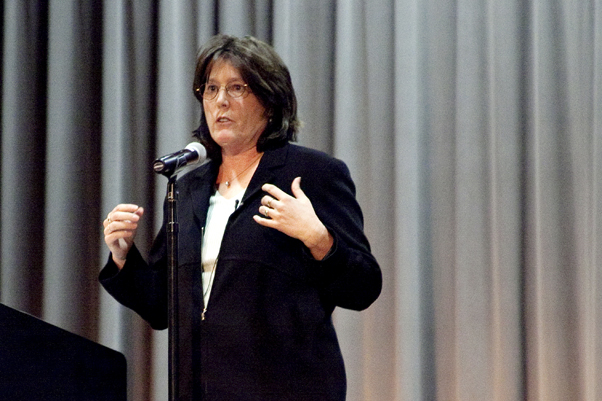 Writer Sally Jenkins explains the importance of sports in American culture Wednesday at the SAC. Jenkins is a renowned sports columnist at The Washington Post with prior experience as a senior writer for Sports Illustrated.

“They are stories we tell ourselves about who we’d like to be,” Jenkins said.

Sports are more than just trivial entertainment, she said.

“What happens on the field is real,” Jenkins said. “They have human flaws: they fail, they choke and oftentimes, they fail the ethics test we administer to them.”

Jenkins said because people value athletes’ authenticity, they hold those athletes to standards that are at times too high. Those standards result from misconceptions people hold about sports, including the idea that sports are healthy.

“[Athletes] are essentially building their bodies up and breaking them back down again in an endless cycle,” Jenkins said.

With the cost of college and the amount of student debt constantly on the rise, the amount of scholarships given to student athletes — particularly in football — should be cut, she said.

“Football scholarships are hugely expensive, and I don’t see how we can do anything about lowering the costs of colleges while they still giving out so many,” she said.

Because the costs of certain sports are so high, other sports will inevitably take a hit, she said.

“Would you rather have to cut a non-revenue-producing sports program that could bring out future Olympians, like swimming or diving, or college scholarships to football players?” she said.

Radio-television-film junior Lee Caffee laments the disproportionate support given to athletics over academics.
“It’s kind of disheartening to hear of the cuts being made to pretty much every department, with one notable exception,” Caffee said.

The announcement of new internships at Sports Illustrated accompanied the lecture. There will be two positions available per semester starting next fall, said Mike Cramer, director of the Texas Program in Sports and Media.

“This is a tremendous opportunity for students interested in sports journalism,” Cramer said. “As Sports Illustrated is, in my opinion, the greatest sports publication in the world, the opportunity is incomparable for students.“

Though there are still details that need ironing, Sports Illustrated is excited for the prospect, said UT alumna Elizabeth McGarr, who helped spearhead the program.

“We are just tickled to death to get some more Longhorns up in New York,” she said.