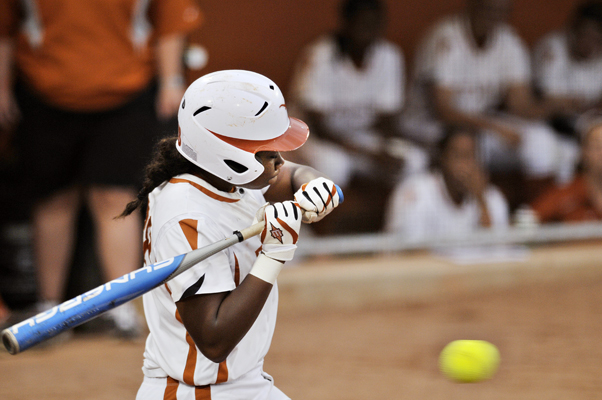 The Longhorns seem to have two personalities. Exactly 24 hours after cruising to an 8-0 shutout victory against UT Arlington in a shortened five-inning game, Texas (39-4) took seven innings to beat Texas Woman’s University 3-0.

“Tonight we played a lot of defense and we had a lot of communication,” said senior catcher Amy Hooks. “Midweek games are a grind and today we grinded it out and got the win.”

Junior third baseman Nadia Taylor had an impressive night at third base. She connected with senior first baseman Shelby Savony for several key putouts that helped starting pitcher Rachel Fox out of some tight spots. In the top of the fifth inning, Taylor made a jumping catch above her head to keep the Pioneers’ runner on third to keep them scoreless.

Fox struck out nine batters while only walking two on Wednesday to lower her ERA to 1.00 for the first time this season and now sits at 0.95. The defense gave up only two hits, both late in the game, and committed no errors.

The offense struggled a bit but maintained the upper hand throughout the game. The Longhorns produced three runs off of five hits. Junior Courtney Craig once again highlighted the offense with a solo home run in the bottom of the sixth inning. Freshman shortstop Taylor Thom, sophomore Kim Bruins and senior Raygan Feight produced the Longhorns’ other three hits. Thom and Feight each had an RBI, which accounted for the other two scores.

The win was not perfect. The past few games, head coach Connie Clark has mentioned that her team needs to focus on the more nuanced aspects of the game. Despite winning, several mistakes throughout the game prevented the Longhorns from taking a bigger lead against an overmatched opponent. Poor base running in the bottom of the second by sophomore Kim Bruins ended the inning early after she failed to tag up at second after a pop up fly ball from Craig.

“We got to commit to the little stuff,” Clark said. “We need to take care of business in doing those things. They will bite us if we don’t take care of them. We are getting the long ball, hitting the ball hard, but we got to be well rounded.”