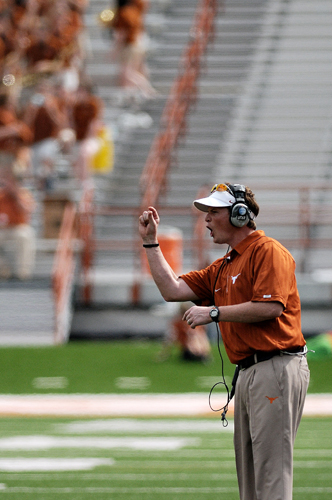 The days of NFL-caliber tailbacks in the Texas backfield effectively ended with Jamaal Charles’ departure following the
2007 season.

After three years of a lackluster running game, Texas now appears poised to return its once prominent backfield to
national recognition.

The rebuilding effort would not have been possible without Texas’ young, new co-offensive coordinators, Major Applewhite and Bryan Harsin.

This fall, top-rated running back prospect and Brenham native Malcolm Brown, who was heavily recruited by Applewhite, will look to reinvigorate the Texas ground game. Brown will get some help along the way in 2012 with five-star recruit Johnathan Gray — the Longhorns’ top target in the class of 2012 — who announced Friday that he will sign with Texas.

While Applewhite also primarily recruited Gray, the Aledo High School product said the new schemes Harsin is installing from his days conducting the high-scoring Boise State offense enticed him to come to Texas instead of Texas A&M or TCU.

With Brown and Gray in the fold, Applewhite and Harsin should have more weapons at their disposal than ever before — another reason why Harsin left a successful Boise State program to come to the 40 Acres.

Gray ran for eight touchdowns in the school’s Class 4A Division II state title game win over La Marque last year and finished the season with a state-record 59 touchdowns to go with 3,223 yards. He told reporters Friday at a news conference announcing his decision that he’s positive he made the right choice with Texas.

Though Gray still has one season left in high school, it isn’t stopping him from looking ahead to donning a Texas uniform alongside Brown in 2012.

“I think we’ll do great,” Gray told the Austin American-Statesman. “He’s a dominant back and I’m a dominant back. You just put two and two together, we’ll make each other better and just try to win a national championship.”

It looks like the Big 12 is here to stay after all.

While there were doubts about the conference’s future after Nebraska and Colorado jumped ship and left the league with only 10 schools, a new television deal with Fox Sports Media Group should preserve the Big 12.

The 13-year deal calls for Fox to televise 40 football games beginning in 2012. The deal’s financial terms were not released, but the Sports Business Journal reported that it could bring in as much as $90 million a year.

“This puts the conference in a great place, not just a good place,” Texas men’s athletic director DeLoss Dodds told the Austin American-Statesman.

Fox, per its current agreement with the conference, already pays $20 million per year to broadcast roughly half as many games as allowed in the new cable rights deal.

The Big 12 also has a network deal with ABC/ESPN that runs through the 2015-16 season worth $480 million. Since that deal is already in place, ABC/ESPN has priority for choosing which games to televise, meaning Fox will choose from second-tier Big 12 matchups — most will be broadcast on Fox Sports Net’s regional networks.