Texas scraps its way to win over Bobcats with late rally 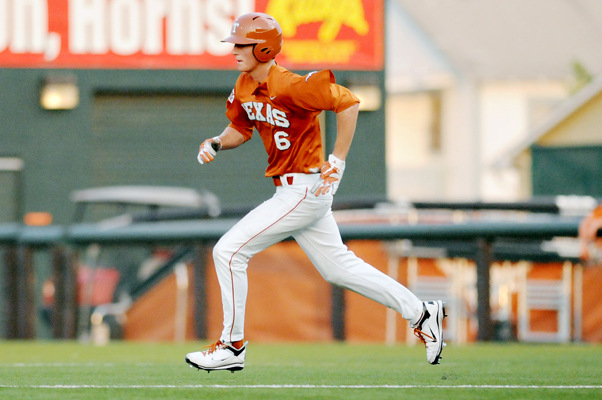 Paul Montalbano reaches base during the Longhorns 2-0 victory Tuesday at home against Texas State. His triple put Texas ahead for good.

It was an ominous start to Sam Stafford’s night on the mound.

The junior, just three days removed from his first loss of the year Saturday at Kansas, threw the first pitch of the game for a ball. For the second pitch, he threw another one. The third pitch brought the same result. Quickly, Stafford was down in the count, 3-0, to Texas State’s leadoff batter Tyler Sibley.

And that’s when he began to fight back.

The lefthander gunned a fastball down the inner half of the plate for his first strike, and then he did it again to draw the count full. Sibley fouled off the next pitch, then watched the third strike rip right past him for the first out of the game.

Stafford’s first-inning triumph was a microcosm of No. 7 Texas’ 2-0 win over the Bobcats (25-15) Tuesday night: No matter how many bad pitches the Longhorns throw, or how many runners they leave on base, or however many great plays the other team makes, this team seems to always find a way to come out on top.

Through five innings, Texas (31-10) put on a clinic on how to leave runners stranded on base and throw away precious outs.

Jacob Felts and Mark Payton hit safely in the third inning and Tant Shepherd struck out swinging to end the frame. Paul Montalbano got on base via a walk in the fourth, then was caught stealing. Jonathan Walsh doubled to lead off the fifth inning and Alex Silver drew a walk, but Felts bunted into a rare 5-6-3 double play to squander Texas’ scoring chance.

Shepherd began the sixth with a single to right field, but a poor sacrifice bunt attempt by Erich Weiss had Shepherd thrown out at second. With Weiss on first, Montalbano smacked a fastball right over the plate to right-center field; long enough for a triple, bringing Weiss home from first and giving the Longhorns’ the run had been eluding them.

“That’s the best ball I’ve hit since I’ve been here,” Montalbano said. “I’m not really a power hitter, so when I swing for the fences, the coaches get on to me. But he [Texas State pitcher Lee Colon] left the ball over the plate, and I was able to put a good swing on it and find the gap.”

It is unusual when Texas has to rely on power hitting to win games — Garrido likes to tailor his offense around bunting and small-ball principles.

“That’s something we keep in our back pocket in case nothing else works: When in doubt, go power,” he joked.

By the time the Longhorns had put their second and final run on the board in the eighth inning — a bloop single to shallow right field off the bat of Walsh to score Shepherd — Stafford’s day was long done. Because of the 54 pitches he had thrown against Kansas, Garrido and pitching coach Skip Johnson didn’t want to test the limits of Stafford’s arm, and pulled him after three innings.

“We wanted him to get back in a zone and get back in his comfort zone and give him a chance to regain some confidence,” Garrido said.

A collection of bullpen pitchers would reprieve Stafford the rest of the way — Nathan Thornhill went 2.2 innings, and Kendal Carrillo, Hoby Milner and Corey Knebel each worked one inning. Carrillo (4-0) got the win and Knebel picked up his thirteenth save of the year — second best in the nation.

“The bullpen did a great job tonight, it was clutch when it needed to be,” Stafford said. “I was scheduled to only go three innings so I was trying to be in control of each situation and establish the strike zone.”

Stafford dug himself into an early hole but fought back, strike by strike, to finish on top. And then, his team followed suit.