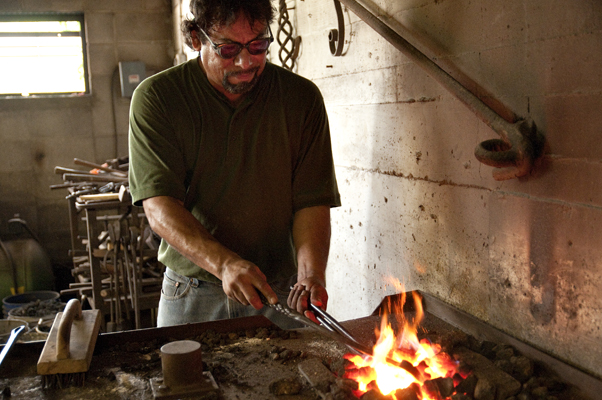 Louis Herrera handles a hot strip of metal before shaping it to fit into a custom iron ornament.

Editor’s Note: This is the second installment of a three-part series profiling artisans who work with their hands.

The sharp clang of metal against metal rings out of Herrera’s Ornamental Iron Works on a humid afternoon in April. Inside the shop, owner Louis Herrera shapes a strip of iron into a point. He muscles a hammer with his hands to mold the red-hot element, then dips it into a basin of water with a sizzle to harden it back to its original state.

“I work with all elements: earth, wind, fire and water,” Herrera says. “This is the easier part for me actually — working with my hands.”

Forging is the process of heating iron to around 2,000 degrees in a bed of pre-cooked coal known as coke and shaping the metal with a hammer, an anvil and various other tools.

“I feel more connected [to the metal when I forge],” he says. “It’s really labor intensive but you are creating something more. You are sticking it in the fire and hammering it and that’s originally how it was made hundreds of years ago when they didn’t have machinery like we do today.”

The Spanish surname Herrera is the equivalent of the English surname, Smith — both originated from trades of which families of the past specialized in. While Smith comes from legions of blacksmiths, Herreras traditionally mastered in iron, their name a derivative of herrería, or ironworker.

“When I hear myself talking about it, it sounds pretty hokey, but our last name is derived from a blacksmith shop, so we’ve come full circle,” he says.

The family lineage started even before Herrera first tried his hands at the trade — it began with his father of the same name. Herrera junior, 53, remembers his father as always being an ironworker.

His father continued working with his hands out of a shop in his home until he died last year at the age of 86, he says.

“[He worked] all of his life. He never stopped working,” he says, staring into the shop as if he could see his father laboring right before his eyes. “Most people that work with their hands, they live pretty long. They are pretty active. And he stayed really busy; he was hard to keep up with.”

After serving in World War II, Herrera senior apprenticed under an iron worker as a part of the 1944 Servicemen’s Readjustment Act signed by President Franklin Roosevelt. He was one of 7.8 million servicemen to participate in the bill’s education or training program after the war and before the bill ended in 1956.

Once the apprenticeship ended, Herrera senior decided ironwork was going to be his lifelong craft, so in the late ’40s he bought land off of Oak Springs Road in East Austin, then in the rural outskirts of the city, and built his shop that would double as his home.

Built into a steep hillside in what is now considered central East Austin, the shop is an urban rendition of the rural escape his father once sought. Although the space is small, roughly 60 feet by 30 feet with the apartment as the second story, it is packed full. Strips of metal, works in progress and a plethora of tools and machinery, including a “New Little Giant” industrial hammer that dates back to 1901, take up most of the ground floor.

Although the land is an autobiography of the life his father built during some of the roughest times in American history, to Herrera, it is just his home and the place he has worked since he was a child.

“I was sort of raised here and I had to work as a kid,” he says. “But there was something I always liked about it, especially with the opportunity because my dad forged metal. Because he did all kinds of metal work.”

By the early ’90s, Herrera senior was unable to produce the work he needed to maintain the shop and make a living, so Herrera junior bought it, once and for all adopting the craft he was born into.

“I had some connection with how hard my Dad worked to take care of us,” he says. “To see him work really hard to start his business and see all of the struggles he went through, I couldn’t see it die.”

To perfect his skills, Herrera studied blacksmithing and metalworking under Frank Turley of Santa Fe, N.M., then under Nahum Hersom, in Boise, Idaho. However, he still credits most of his mastery to his father.

“Before [apprenticing] it was my dad; my dad all my life. He taught me 98 percent of everything I know,” he says. “When I went to these other places, I had a good handle on stuff. It was easy for me to learn and pick up.”

Eight years ago, he moved into the home built above the shop. The home his father built with his own hands. The home he was born in. The home he grew up in. And, now, the place he will continue to call his home.

“I can’t get away from this place, I always come back,” he says. I think I’m going to be cremated and I am going to be scattered here. I realize I came out of the dirt of this place. And I live here now.”

From the dirt that his father broke to build the shop, to the tools that date back to the turn of the century, his work is steeped in the history his father made. A quote written in calligraphy on a yellowed, framed piece of paper that belonged to his father hangs on the wall as a reminder of what iron work is about.