The Thunder is Americas favorite team in the playoffs 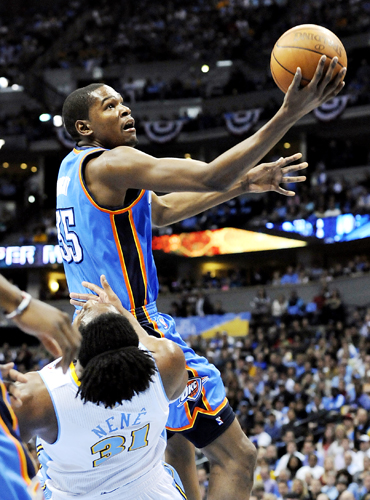 Hear that rumbling coming from the distance?

It’s a bird. It’s a plane. No! It’s Thunder. The Oklahoma City Thunder, that is. The NBA team is on its way to the second round of the playoffs.

Watching the Thunder on TV is the closest we are getting to rain in Central Texas, and its sound
is beautiful.

Do you hear it? It sounds very familiar. It sounds kind of like “The Star-Spangled Banner.”

That’s because the Thunder has a new nickname: America’s team.

Everybody loves the Thunder, and they have good reason to.

First of all, they are young and exciting, which coincidentally are two characteristics Americans love about anything. People don’t want to watch a team full of video iPods. They want iPad 2s.

The Thunder is the NBA’s third-youngest team, with the average age of its players at just more than 25 years old.

This includes the now four-year NBA veteran and back-to-back scoring champ Kevin Durant, who, believe it or not, is still only 22.

In Austin, we all know about Durant. We know he is not just a great basketball player but a great guy. He is also grateful for what he has and what he’s accomplished. He’s not the egotistic star player who needs to be in the spotlight.

America saw this first-hand this summer. Kind of. When Durant signed a five-year $86 million contract extension last summer, it was just a side note. That was because meanwhile, another superstar, LeBron James, had the world on the edge its seat as he eventually “took his talents to South Beach.”

Durant didn’t want to put the Thunder through the same ordeal that Cleveland, New York and the other LeBron suitors had to go through. If he did, there would be a huge distraction right now as the Thunder fights for an NBA championship.

There is much more to the Thunder than Durant. Russell Westbrook, Serge Ibaka and James Harden, all 22 or younger, give the Thunder a solid core of versatile players who, for the most part, are selfless and complement Durant’s play.

America likes selflessness. People don’t want to see a player get a spectacle like “The Decision” and then go on to screw over an entire city.

Have you ever heard anyone say they just can’t stand the Thunder? I certainly haven’t. I’ve said this once, and I’ll say it again: Everyone loves the Thunder.

Part of this has to do with the Thunder lacking any real rivals. It’s not like what the Lakers and Celtics have.

The only reason to possibly dislike them would be because they are playing your favorite team. But it still shouldn’t bother you too much. And if you dislike them just because they play in the same state as the Sooners, then get a life. For the first time, the state of Oklahoma has something great. They do have casinos, but drinks aren’t free and there is a 50-cent ante for each hand of blackjack, so I will just call that good.

May the Thunder roll.