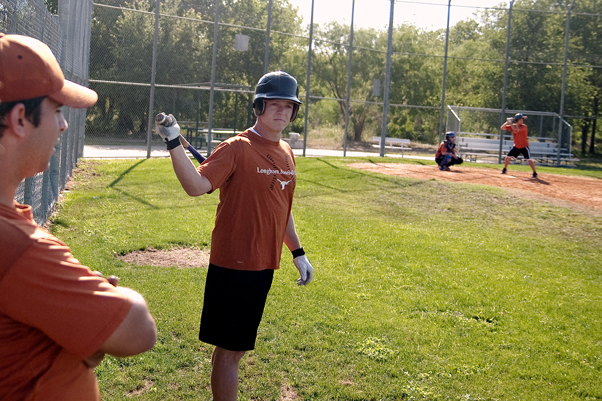 Forget about the past. From now on, it’s win or go home for the Longhorns.

After posting a perfect record during conference play, the Texas club baseball team will look to take two of three from Texas Tech this weekend and claim the Gulf Coast North conference championship for the first time since 2006.

“Obviously, we expect to beat the Raiders this weekend in two games,” said junior outfielder Jonathan Fletcher. “But this is just one of many stepping stones needed to reach our ultimate goal.”

The teams will play a double-header starting at 12:30 p.m. Saturday at William B. Travis High School. If necessary, game three will happen Sunday at Vista Ridge High School.

Although the Longhorns aren’t looking past the Red Raiders, they realize that this is just the beginning, as they hope to accomplish their preseason goal and make a run at the National Club Baseball Association’s World Series.

If the team is able to win this weekend’s three-game series, it would move on to the regional championships where it would play the Gulf Coast South conference champion. The Longhorns are equally fond of their chances in that matchup.

“In the regional, we expect to win,” Fletcher said. “We would most likely play our archrival, Texas A&M, and would have to win another three-game series.”

If the Aggies advanced to regionals to play Texas, it would be a shot at redemption for the Longhorns. A&M swept the series last time the two met in late February. Texas hasn’t lost since.

Once through regionals, the team would move on to the NCBA World Series held at Golden Park in Columbus, Ga. The park is known by many for its use as the official softball venue during the 1996
Summer Olympics.

Texas realizes how much it would mean to the program to reach the World Series and have an opportunity to win the first national championship in the club’s 10-year history.

“To move on to the World Series in Georgia would be a great accomplishment for the club team,” Fletcher said. “We have worked hard this year to make it to that point, and we feel we have a good shot at this feat. We would be one of eight teams out of the 120-plus Division I clubs to make the World Series.”

Regardless of what happens during its postseason run, this year’s team has already had great success. Led by fourth-year player and coach Patrick Hyde and a young, powerful starting rotation, the Longhorns’ 29-4 regular-season record is the best in club history. The team has won 12 straight and has a perfect 9-0 record in conference play.

But success is what you make it.

“It feels great to be a part of one of the most successful club teams here at UT,” Fletcher said. “However, to us, the year will not be successful until we bring home a national championship.”