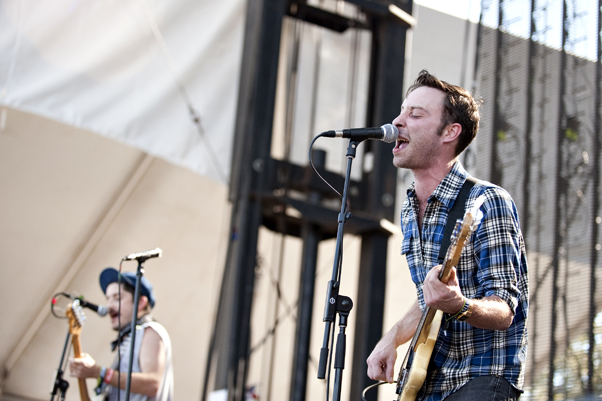 The Black Lips are an Atlanta-based punk band that has been playing for nearly a decade. Their sixth studio album, Arabia Mountain, will be released on June 7.

It isn’t necessary, at least for Black Lips and Vivian Girls, to cite the growing lo-fi trend in music anymore.

For Vivian Girls, singer-guitarist Cassie Ramone always asserted that the band wasn’t intended to be associated with the leagues of lo-fi bands emulating its sound, while also vehemently denying that the band’s all-female roster was some sort of gimmick.

One thing Black Lips and Vivian Girls do share though is the true, quintessential spirit of the D.I.Y. punk scene, buried under layers and layers of fuzz and distortion. Black Lips singer-guitarist Cole Alexander talks about bringing punk music to the far corners of the world like a new-age Marco Polo. Ramone talks about the Vivian Girls’ latest album, Share the Joy, the way you would describe an existential nightmare: “[It dealt] with alienation, rejection, loneliness … ”

Read on to find out what Alexander and Ramone had to say about the ongoing tour, 1990s nostalgia, collaborating with Waka Flocka Flame and more.

The Daily Texan: Can you tell me a little bit about your upcoming album Arabia Mountain? Were there any issues in recording?

DT: You mentioned a producer: were you talking about Mark Ronson?

CA: Yeah, and you would think that that would be contrary to our sound. But Amy Winehouse’s album has those great rich sensibilities, those '60s sounds and old-school vibe. We tried to go with that retro vibe with him.

DT: I understand you’ll be touring with Vivian Girls as well — I really love those girls. I understand you guys recently partied with them, Surfer Blood, the Strange Boys and a bunch of others recently? Can you tell me a little bit about Bruise Cruise?

CA: [laughs] We partied with them on the Bruise Cruise. They did a cover of Celine Dion’s song from “Titianic” on the boat and scared everybody. But yeah, they’re really really cool.

DT: Now that the band has been putting on live shows for a little over a decade now, do you feel obligated to tone down the energy?

CA: I wanna bring up the energy, actually. We haven’t settled down, we just don’t do the same thing over and over again. We’re not one-trick ponies that do the same thing. I always tell people that like with GG Allin, if you can do even 20 percent of what he did, you’re going to do amazing things.

DT: Considering that you’ve travelled all over the world – Europe, India, and beyond, what does it feel like to play in, say east Atlanta Village, or a small town in the Midwest?

CA: Well, I mean, you’ll notice, all the great explorers — even Marco Polo — stopped in all the small towns to meet the people. We’re like punk rock Marco Polos.

DT: I think it’s really terrific that you’ve collaborated with GZA, and I think it was Jared who mentioned during SXSW that you might try to talk to Waka Flocka Flame about doing something as well, but I couldn’t tell if that was a joke or not.

CA: We’re talking to Waka Flocka. I really like his Gumby chain and I think he’s bringing some good stuff to the rap game. I really want to talk to Tyler [the Creator] from Odd Future [Wolf Gang Kill Them All].

DT: Speaking of collaborations, I have to ask about Almighty Defenders – was that sort of a one-off with King Khan & BBQ Show?

CA: Yeah, that was a one-off, but you never know! One of these days, who knows.

DT: What was the first album you purchased with your own money?

CA: I think Nevermind by Nirvana.

DT: How would you describe your perfect sandwich?

CA: [laughs] My perfect sandwich is the like fried peanut butter and banana sandwich.