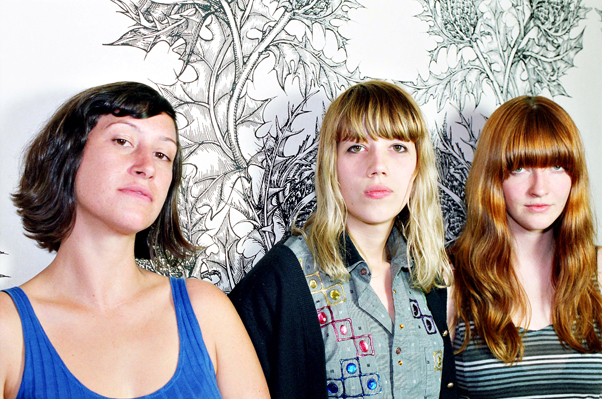 Vivian Girls is a New York-based band that makes dreamy garage punk influenced by old punk bands such as the Wipers and 1960s girl groups such as The Shangri-Las and The Chantels.

The Daily Texan: Cassie, we corresponded through mail very briefly, and I was surprised to see you mentioned Share the Joy, Vivian Girls’ third album, as a “different sort of journey.” Can you talk a little more about that? I feel like the word “journey” implies that there were trials and tribulations that came along with the making of this album, maybe?

Cassie Ramone: All of our albums have vague themes. It’s important to me to make an album that’s more than just a collection of songs. I don’t want to hit anyone over the head with a concept, but I do believe that it makes repeated listens more rewarding if there’s an element there that you don’t pick up on at first. The first album is very linear. It tells a kind of story like a series of diary entries. Everything Goes Wrong, to me, is more of a weird semi-nightmare where time is turned on its side, and you’re never quite sure of where you are. Most of my dreams are like that: you’re trying to get somewhere but the goal is very unclear or always shifting. Share the Joy is slightly more linear than Everything Goes Wrong. The songs on the first half of the album deal with alienation, rejection, loneliness … and the second half of the album deals with reconciliation and learning to be okay with all the aforementioned problems. But the way the album is structured, it takes you back to the beginning once you reach the end. It’s like looking in a warped mirror.

DT: I was excited to see that on Share the Joy, the first and last tracks happen to clock in at more than six minutes each. Did that come from a desire to break away from what Vivian Girls has done in the past (2-3 minute songs)? Or was it just an afterthought?

CR: A lot of elements on the albums stemmed from desires to break away from what we had done before. The six-minute songs are the most obvious thing. But it wasn’t a thing where we were like 'OK guys let’s really show these people we’re serious and write the longest songs ever.' We wrote the songs and after we’d practiced them a few times, we taped them, and only then did we realize how long they were. I’d also like to add that we were starting to get into that territory with “Out For the Sun” on Everything Goes Wrong, so we view the longer songs as a natural progression for us.

DT: This might be way off base, but I get the vibe from Vivian Girls’ personal style and references to 1990s ephemera (Kimmy Gibbler in “Full House,” Christina Applegate in “Married With Children”) that the band dwells on childhood nostalgia a lot?

CR: [laughs] The funny thing is, I was never into those shows as a kid. My parents didn’t let me watch much TV — only an hour a day of a VHS movie — so I missed out a lot on the collective unconscious of early '90s childhood. The shows I would watch were mostly cartoons. I got really into “Full House” for the first time when I was 19, which I guess is pretty late in the game. I think for me it’s a thing like — it’s something I missed out on, so I find it special, but I was still there when it was around, so it’s like a mystery that was right in front of my eyes. It’s definitely got childhood nostalgia. I’m not sure what it is. I look at Christina Applegate and the “Full House” girls and get a feeling of zen. I might be the only person. I guess I just think modern fashion is so terrible for the most part; the way the average woman presents herself today is really unattractive to me, so I was to look like a babe from the past … if that makes any sense at all.

DT: Considering that you do a lot of the artwork for Vivian Girls, does your creativity ever come out in other ways (besides music)?

CR: I love photography. I try to bring a disposable camera on most tours. I like having a camera on hand to capture candid moments — I’m not really interested in taking staged photography where the subjects are aware of the camera. I used to write a lot, but my writing mainly comes out in lyrics nowadays.

DT: You tweeted about eating Denny’s for the first time in a couple of months recently. What did you order?

CR: I get the item on the $2/4/6/8 menu called the French Toast Breakfast. It’s a new addition to the Denny’s menu, and I got really excited when it first appeared, because I’d literally been special ordering it for years. I like to get the French toast, two eggs, hash browns and bacon, and Denny’s had no option for that combo without it costing something like $11, but now it’s $6, and I’m very happy.

DT: How has it been touring with the Black Lips?

CR: It’s been amazing. I think they are a very misunderstood band — they’re some of the smartest and most caring people we know. We are one big family.

DT: Summer is coming up – it’s pretty much already here in Texas. What are your ideal summer plans after this tour is over?

CR: We’re going to take a month and a half off before we go on tour again. Ideally, I’d like to take a very long road trip that had nothing to do with touring, maybe drive to the Grand Canyon and stay in that area for a while, with an old school Winnebago, see all the weird sights of the American highway. That won’t happen. My realistic plan is to get my wisdom teeth taken out and buy a bed frame — I’ve been sleeping mattress-on-the-ground style for quite a long time. Exciting, I know.