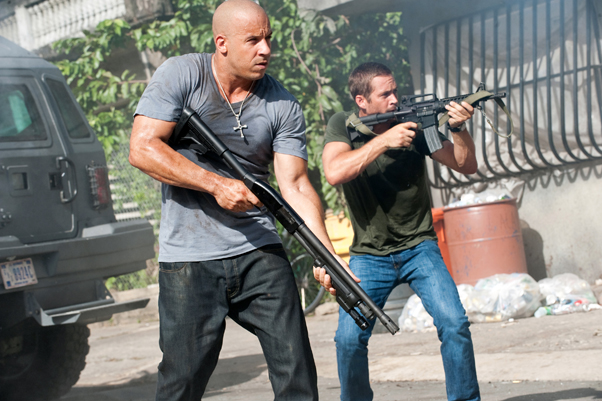 Since “The Fast and the Furious” debuted in 2001, the franchise has powered through a series of hilariously titled sequels (“2 Fast 2 Furious”) and an increasingly wonky chronology that forces “Fast Five,” the fifth and latest film, to function as a prequel to the third, “Tokyo Drift.”

What’s more shocking than five films dedicated entirely to the appeal of fast cars and testosterone is that the franchise’s fifth film is easily its best; a deliriously silly action film that would make Michael Bay proud and the perfect starting gun for the summer movie season.

After returning to the franchise in the last film, Dom (Vin Diesel) and Brian (Paul Walker) are on the run from the law. Taking refuge in Brazil, the two quickly find themselves in the crosshairs of notorious drug lord Reyes (Joaquim de Almeida) and decide to pull one last job before getting out of the criminal life forever.

Making matters worse is the arrival of Hobbs (Dwayne Johnson), a federal agent dead set on tracking down the crew. As one might imagine from the plot, “Fast Five” has yet to meet a cliche it doesn’t like.

Thanks to the energetic enthusiasm that runs throughout the film, the film relishes its silliness. Johnson’s perpetually sweaty FBI agent is saddled with an endless amount of flat tough-guy dialogue that’s somehow made B-movie and chuckle-worthy thanks to Johnson’s delivery.

Walker, on the other hand, struggles to break free of the wooden frat-boy persona that has defined his career thus far, always seeming on the verge of suggesting the characters go shotgun a beer.

Diesel is similarly strained, doing fine when he’s asked to look intimidating or fight someone but struggling when asked to emote. But there’s only one reason someone would see “Fast Five,” and those looking for some truly awe-inspiring vehicular action scenes will be more than satisfied. Every action sequence is spectacularly directed by Justin Lin, helming his third film in the franchise.

In particular, the film’s lengthy climax is absolute insanity, a go-for-broke chase through the streets of Rio de Janeiro that takes an infectious amount of joy in the spectacle of destruction.

Unfortunately, “Fast Five” has one glaring flaw: its 130-minute runtime. No matter how awesome and effective its action sequences are, there is absolutely no excuse for a “Fast and the Furious” movie to run more than two hours. Despite an ass-achingly long runtime, “Fast Five” is a promising beginning to a summer overflowing with sequels. Audiences with the fortitude to stick around through the credits get a brief teaser of a potential sixth installment.