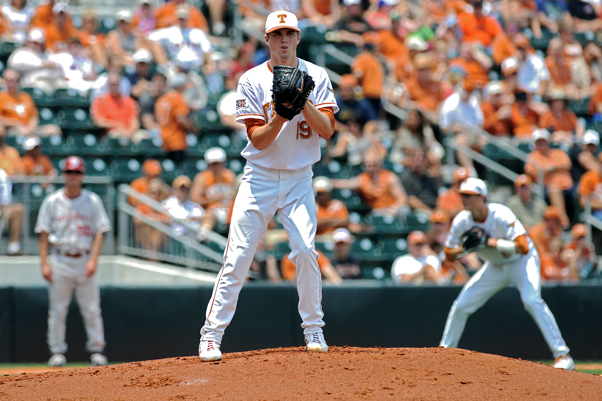 Sam Stafford gets ready to deliver a pitch Sunday at Disch Falk Field against Oklahoma. Stafford had a sub par performance in the game and was pulled from the game in the fourth inning.

The Longhorns claim they just came out flat.

But how, against archrival Oklahoma? And how, with the chance to sweep the Sooners and claim sole possession of first place in the conference race? Flat with ESPNU in town?

“We didn’t try to come out lazy or complacent,” said sophomore Jonathan Walsh. “It might just be subconscious.”

The offense slept-walked through the first eight innings — save for Tant Shepherd’s fourth-inning home run — and, by the time the bats came to life, it was much too late.

Oh, there were plenty of chances for Texas to rectify its slow start. After Shepherd’s long ball, two Longhorns got on base via walks but were sent back to the dugout after Walsh grounded into a 5-4-3 double play.

With the bases loaded in the sixth, Walsh batted nicely against Oklahoma’s Dillon Overton, drawing a full count. But he swung and missed on what would have been ball four — a fastball at his eyes.

“I just can’t believe I swung at that,” Walsh said. “I came up with a couple situations where I had guys on base, and I didn’t come through for the team, so that was my bad.”

Head coach Augie Garrido singled it out as a turning point in the game.

“You strike out on ball four with the bases loaded, and that’s a momentum buster,” he said.

This stinker of a game looked like Texas’ 10-1 loss to Maryland or its 7-3 loss to Brown — early-season defeats that featured an offense somewhere in between lethargic and nonexistent.

The relapse comes at a bad time. Not only was the dud featured on national television, but it knocks the Longhorns out of the catbird’s seat in the Big 12 conference race. With Texas A&M losing two of three at Missouri this weekend, a sweep over Oklahoma would have put Texas in prime position to finish first in the standings, all but guaranteeing a national top-eight seed and home-field advantage for the Regional and Super Regional tournaments.

But the Sunday loss puts the Longhorns tied with the Aggies, meaning the mid-May series against A&M is now a must-win.

“We really would have liked to come and sweep this series,” Walsh said.

That would have been accomplished if the Texas bats had shown up like they did in the first two games of the series — a 5-0 win Friday and a 4-3 win Saturday. But only one Longhorn finished with multiple hits (Shepherd), and two of the team’s best players failed to register a hit, as Brandon Loy went 0-for-5 and Erich Weiss went 0-for-3, which means that the freshman’s hit streak comes to an end at 15 games.

“We didn’t have that burning desire,” Garrido said. “There’s a level of complacency that sets in after you’ve won a series, if you let it.”

Clearly, Texas had their old foes, contentment and complacency, come back to haunt them again Sunday. But how could the Longhorns let it happen again?

They’re still scratching their heads trying to figure that out.