Cardinals surprise Acho in fourth round 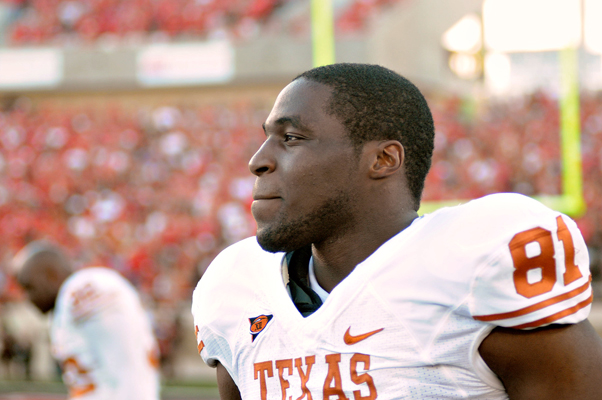 Former Longhorn defensive lineman Sam Acho was selected in the fourth round of the NFL Draft on Saturday. Acho will likely be moved to outside linebacker with his new team.

Prior to the 2011 NFL Draft, Arizona was the last place Sam Acho imagined he would be playing football.

On Saturday, the Cardinals surprised Acho when they selected him in the fourth round. Arizona didn’t bring in the former defensive standout for any type of workout or visit and caught him off-guard when the phone rang.

“I couldn’t even imagine being picked by the Cardinals,” Acho said. “I haven’t heard anything from them all the last couple months, so it’s a complete shocker to me.”

Arizona runs a 3-4 defense, and coaches told Acho they envisioned him as an outside linebacker. The Dallas native was recruited to Texas at that position, but transitioned to defensive end after two years.
Acho doesn’t see any trouble adjusting to his new role.

“I can learn that position easily,” he said. “I’ve done it before and I have a good feel for it.”

The NFL reverted to a lockout over the weekend, leaving draft picks without the chance to pick up their playbooks. Instead, Acho will seek counsel from former Longhorn teammate Brian Orakpo.

“I know he can give me a lot of good advice and we’re going to be running a similar defense as the Redskins, so I can’t wait to be able to talk to him about everything,” Acho said.

Curtis Brown will see some familiar faces when he begins the Pittsburgh Steelers’
training camp.

Brown will join former Texas star Casey Hampton on the Pittsburgh defense, as he becomes the fifth Longhorn on the Steeler’s roster — receiver Limas Sweed, and offensive linemen Tony Hills and Jonathan Scott are the others.

Head coach Mike Tomlin saw Brown work out in person during the Texas Pro Day in March, so it came as no surprise that Pittsburgh drafted the defensive back on Friday with the 95th overall pick.

What did surprise Brown was the fact that his name was still on the board at the end of the third round.
“I was waiting all day. I thought I was going to go earlier, but it didn’t happen,” he said.

Now that the waiting game is over, the Gilmer native can’t wait to get on the gridiron where his expectations for his rookie year are simple.

“Just being a player they can depend on in any situation,” he said. “Special teams — I’m down for that. If I make my way onto the field early, I’m going to make it happen. I’m going to contribute in any way.”

Chykie Brown was the last Longhorn to hear his name called on draft weekend, becoming the 12th Texas defensive back drafted in the past decade.

Baltimore nabbed Brown in the fifth round on Saturday with the 164th overall pick. The Ravens told the Houston native he lasted until the third day because of concerns about a forearm injury that ended his senior season after nine games.

But Brown had all but given up on watching the draft on TV when the Ravens came calling.

“I went to my cousin’s house down the street and we just turned the draft off and we just talked about some things to get my mind off of it,” he said. “I was actually in the car on my way home when I got the phone call and my heart started beating and I got excited.”

Now that he knows he’s wanted in Baltimore, Brown says he’s ready to get to work.

“They’re a team known for the defense and they like bigger cornerbacks, so I think I’ll fit in their scheme very well,” he said. “I just want to go up there and be able to show them what I’m about.”