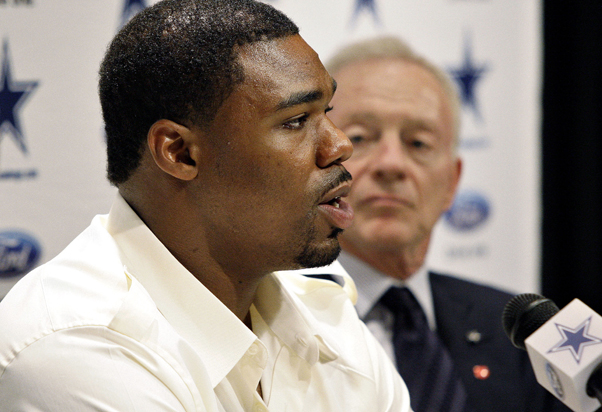 The Dallas Cowboys are coming off a season where it would be either Super Bowl or bust, as they were looking to be the first team in NFL history to play the big game at home.

Unfortunately for the Cowboys, the season ended up being one of the most disappointing in team history, a 6-10 finish that netted only one positive: the No. 9 pick in last weekend’s NFL draft.

The Cowboys decided tackle was the biggest need, and went with Tyron Smith, a right tackle out of USC.

Smith was widely considered the best tackle in the draft and will most likely step into a starting role at right tackle replacing an aging and injury-prone Marc Colombo. Smith also has a very high ceiling going forward with quick feet, long arms and great athleticism. These talents could help him grow into a great left tackle that could protect Cowboys’ quarterbacks from the blind side for the next decade.
In the second round the Cowboys decided to go with the most talented player on their draft board instead of reaching for a less talented player in a position of need, selecting Bruce Carter from North Carolina.

Carter has first-round talent, but dropped into the second round due to a season-ending knee surgery in his last year with the Tar Heels.

Carter will not start right away like Smith, but could be a replacement in the near future for Bradie James, who will be a free agent at the end of the year.

In the third round, the Cowboys went with a bit of a puzzling pick in Oklahoma running back DeMarco Murray. Running back is considered one of the Cowboys’ strong suits, but Marion Barber could be on his way out this offseason to cut cap space, Felix Jones is injury prone, and Tashard Choice is a liability on special teams.

Murray could be a great addition for Dallas, as he is a strong special teams player, a talented runner and an excellent pass catcher, something the team had been sorely lacking the last few years. Murray could also turn out to be the Cowboys’ running back of the future as he showed flashes of greatness at Oklahoma that could carry over to the NFL, like previous Oklahoma running back phenom Adrian Peterson.

In the last four rounds the Cowboys decided to address needs, starting with another offense lineman, David Arkin, who could be the sleeper of the draft for the Cowboys. He has all the talent of a high pick but slipped into the fourth round because he played at a small school, Missouri State.