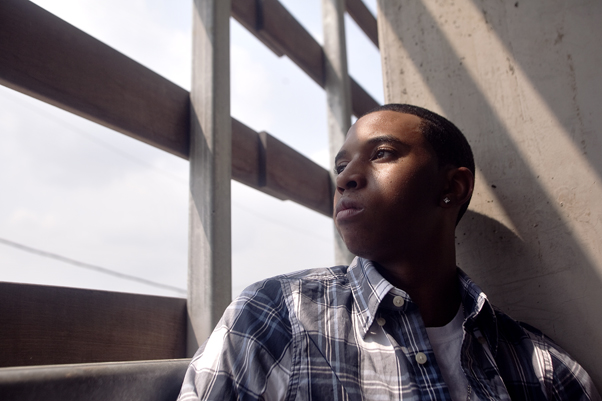 Ogden Payne, a 19-year-old hip-hop artist in Austin, is largely inspired by Kanye West. Paynes upcoming mixtape, Late Night Thoughts, focuses on the struggle advancing in the music industry and attracting an audience.

Ogden Payne came out to Fifth and Baylor streets, spotted us and then led us into an alleyway. In his moments as a tour guide, he kept pausing to interject reassurances of the legitimacy of the place we were going. It was a recording studio hidden in a warehouse, tucked into an alleyway. Despite the shoddy exterior, artwork hung on the walls inside and dark leather couches lined the sides of the room, partially hidden by the dim lighting. The focal point of the room was the mixer and desktop Mac sitting on a desk near the back wall.

The studio is where Payne has been spending much of time recently recording his new mixtape, Late Night Thoughts. Still relatively unknown in the Austin rap circuit, Payne is eager to be noticed and become a familiar face to an audience at 5th Street Studios.

“Pharrell and Wale have recorded here,” Payne said, excitedly warranting his rationale for use of the studio. “Wale recorded here last week,” he added.

He’s youthful in appearance, but it’s easy to forget as he talks that he’s only 19 and a freshman in college. Payne appears to have focus and ambition beyond most aspiring artists his age. His poise and confidence don’t harm this image other.
“I’m not trying to be cocky, but I feel that quiet confidence,” he said.

Payne’s mature rapping style only further distorts perceptions of his age. In a state where slow rap over extreme bass reigns supreme and in a city that features a number of awkward hip-hop artists who don’t quite fit into a niche, Payne stands out. With a self-professed quick, substantive Northeast style, Payne’s flow resonates with maturity. His verses sound like they come from someone far more experienced than anything Payne boasts at the moment. This distinction makes sense when he explains his methods.

“I feel like the avenue I’m taking is really unique,” Payne said. “I’m not trying to ride the train of what the trend is. I’m not trying to compete with people on my level. I want to try to be the best and compete with someone like Kanye West. That way, even if what I do isn’t that good, it’s still a lot better than someone right next to you.”

Kanye West is actually a large part of why Payne got into rapping. Payne recalled being blown away while listening to “College Dropout” in his friend’s car. It took more than West’s skill to turn Payne to rapping. It took a great deal of prodding from his friend to convince the skeptical Payne to give rapping a chance. Everything changed after that.

“Three months later [after starting rapping], I feel in love with it. It was something I’d always wanted to do,” he said.
Music soon consumed Payne’s life, growing beyond what started as a casual hobby. He occasionally relaxes to a baseball game on television but devotes most of his time to music. At Austin Community College, he is working toward a degree in audio engineering.

Although Payne has yet to make a huge impact on the Austin music scene, inside or outside of hip-hop, he released a five-song demo EP two years ago to garner minor attention. He has yet to gain a tremendous following through his live shows.

His forthcoming mixtape, Late Night Thoughts, changes that. As a rapper, Payne is technically sound, and his influences and insight go far beyond all that is typical of the genre. While his music tackles familiar subject matter, such as relationships and the hardships of climbing the social hierarchy, Payne packages it in a different manner from his peers, presenting his stories in rich, coherent narratives that listeners can understand and relate to.

Besides Kanye West, he lists Aretha Franklin as a huge influence. Outside of music, his parents play a role in his writing as well.

“[My parents and I] share stories,” he said. “They’re like those quiet people; they don’t say much but when they do it’s something important to listen to. That [storytelling] is what I feel like influences me the most.”

Payne’s talent and ability far exceed his reputation, but he has no reservations and remains patient. He has another mixtape in the works to be released later this year and possibly an album on the horizon.

“Everything happens for a reason,” Payne said. “Like my dad says, ‘It’s not personal, it’s just business.’”