Artist discusses themes of childhood in his work 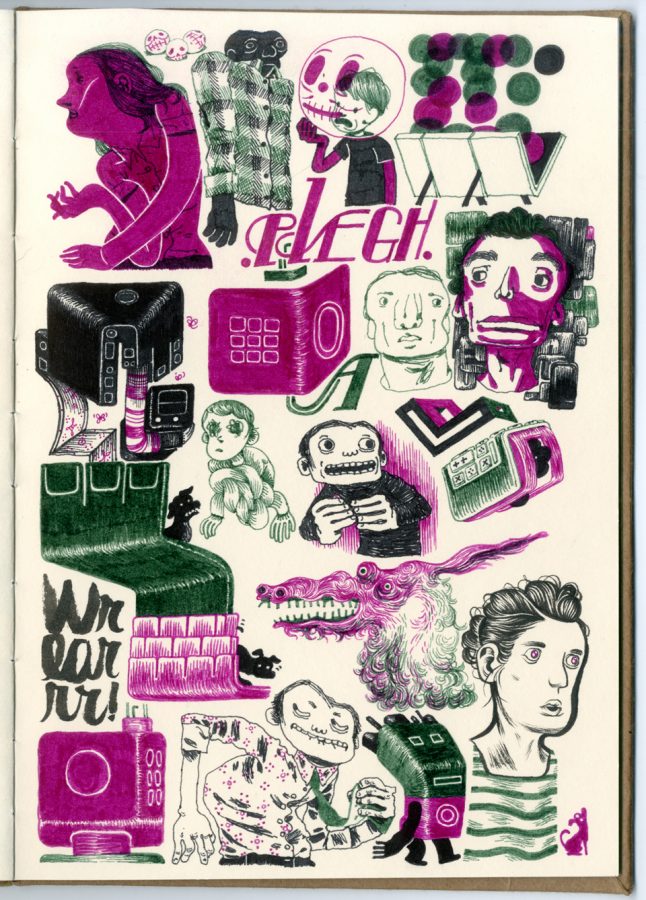 Daily Texan: I was first exposed to your work with “Turtle Keep It Steady,” probably from that “Best American Comics” compilation. You mentioned in “I Will Bite You’s” liner notes that this was a class assignment at the Center for Cartoon Studies. What were some interesting insights you think you learned from academia? If that’s a little too general of a question, what was something you learned particularity from this assignment?

Joe Lambert: The idea for “Turtle” came from a sketchbook doodle, so I learned to really trust my sketchbook as a place for cultivating ideas.

DT: Kids figure prominently in your work (“I Will Bite You!” has only two stories without kids as central characters; “Turtle” and the caveman story), particularly kids at odds with their suburban environment. What draws you to these kids’ mischievous explorations?

JL: I’m very interested in exploring my childhood memories, especially in relation to my adulthood. Seeing my youth from the perspective of my current age gives me a hindsight to see patterns and reccurring themes, and I like exploring those themes through my characters. I have a harder time writing adult [characters] because I don’t have the same perspective on my own adulthood the same way I do with my childhood. Another thing with the stories in “I Will Bite You!” is that they are all very basic and plain as far as character motivations and conflict. I don’t like the stories to get too cluttered so I tend to keep the story elements simple, and I find kid characters are the easiest to understand when it comes to simple emotional motivations. Kids are complex, but they often respond to things in basic, visceral ways. So when one sees an angry kid it’s easy to recognize the emotion and sympathize and continue with the rest of the story. I think it’s more difficult to do that with adults because our motivations are more cluttered. I’m being very general here.

DT: I personally, having younger siblings, identified with the older character in “Mom Said.” What year is it in the story? I really dig the abstraction of the music in the piece. What song is the older brother listening to as he’s trying to ignore his brothers?

JL: I guess I placed “Mom Said” during my childhood, in the ’90s. Though I don’t know if there is anything that is specific to any time. I guess the stereo is older than something from the ’70s. And the calculator is loosely based on one from Dieter Rams [a functionalist industrial designer], which could have been purchased in the ’80s. Truthfully, I wasn’t really thinking of a specific song the kid is listening to. And even if I was, I don’t think I would say, keeping it open makes it easier for you to apply whatever song you want it to be. Something loud though, I think.

DT: Speaking of abstraction, that was an awesome CF-ish [“Powr Mastrs Vol. 3“] page near the tail end of “Too Far.” You have a strong vision for the fantastic; what are some influences for the more phantasmagorical influences of your work?

JL: I’m not great at identifying my influences. I just end up naming everyone I like. I think what I strive for most is clarity. I think the thing I’m most influenced by lately are scenes that are staged clearly. I can’t think of an example, but I know I’ve noticed it lately. I also think I’ve been inversely influenced by all the crappy superhero comics I read growing up in the nineties, with the absurd panel layouts and poorly staged action, or movies where the action is messy and shaky. So with fantastical scenes like the one you mentioned I’m mostly influenced by the urge to show the fantasy elements as clearly as I show everything else so that there is a clean juxtaposition. I guess. I’m kind of dancing around the fact that I’m spacing on naming my influences.