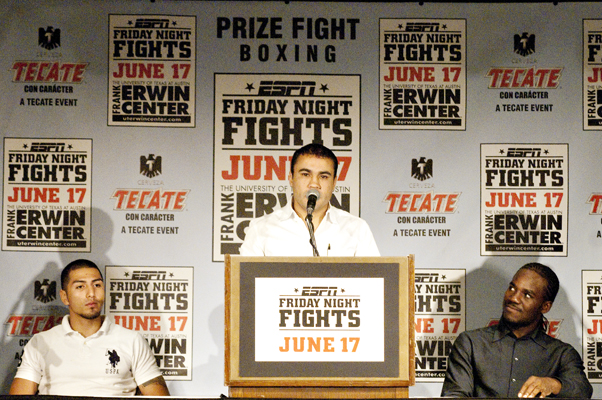 Jesus Chavez speaks during a press conference announcing the return of Friday Night Fights to Austin. The fight will be held on June 17.

The last time ESPN’s Friday Night Fights came to Austin, in September 2008, Jesús Chávez was busy training for a fight against Andres Ledesma in Houston.

When the cable network’s popular boxing show returns on June 17, Chávez will be front and center, part of a ceremony honoring him as the most famous fighter in the city’s history.

Chávez finished with a professional record of 44-8 and captured both the WBC Super Featherweight and IBF Lightweight titles in his career. His most famous bout was against the still-undefeated Floyd Mayweather Jr. in 2001, a nine-round slugfest that ended in defeat for Chávez when his corner stepped in.

Chávez would never have stopped it himself. He was known as a tough and pugnacious boxer and impressed many fans by going 12 rounds against Erik Morales in defense of his featherweight title in 2004 despite dislocating his shoulder early in the third round. Chávez lost the match but gained the attention and respect of the fighting world.

Although agent Lester Bedford said Chávez might put on the gloves one last time, “if the right fight came along,” the boxer was much more candid about his future.

“I am saying my farewells to the fighting game,” Chávez said.

Chávez last fought in October 2010. He now works as a trainer in the Dallas area, having replaced his gloves with training mitts for the most part.

But when he’s brought onstage at the Erwin Center this summer, he’ll once again be at the center of the Austin fighting scene — an appropriate spot for the man who won the hearts of Texas boxing enthusiasts.