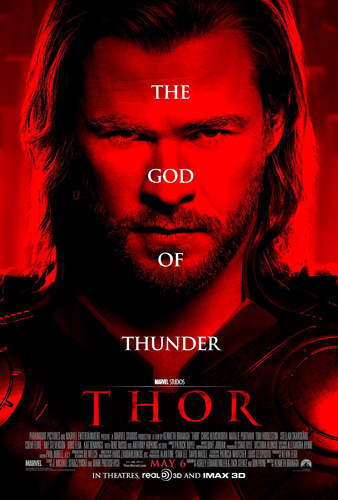 In the run-up to next summer’s “The Avengers,” Marvel Studios has overcome the obstacles of building audiences for a range of superheroes and casting actors entertaining enough to sustain those audiences. However, the biggest challenge lay in adapting “Thor,” a comic book somehow less realistic than the likes of “Iron Man.” And shockingly, they’ve done a halfway decent job.

We meet Thor in the mystical realm of Asgard, ruled by Odin (Anthony Hopkins). As Thor (Chris Hemsworth) prepares to ascend to his father’s throne, an ill-advised military move causes Thor to be cast out of Asgard until he learns humility. Banished to Earth, Thor meets a scientist (Natalie Portman) and, unsurprisingly, learns to be a true hero.

Director Kenneth Branagh has usually worked in stuffy period pieces and does his best with his first foray into the superhero genre, packing the scenes set in Asgard with vibrant colors and contrasting the film’s multiple worlds with distinct visual styles. Unfortunately, Branagh also leans entirely too heavily on irritating Dutch angles, filmed at an odd slant, and weighs things down with superfluous 3-D, making the action scenes hard to decipher and adding nothing to the slower moments of the film.

Even more troubling are the bizarre comedic elements the film wallows in as Thor begins to learn the customs of Earth. While Hemsworth’s winning delivery saves a few of these moments, Branagh’s distorted sense of comedic timing makes most of them fall flat.

Large chunks of the film work thanks to Hemsworth, who made huge waves in the opening sequence of 2009’s “Star Trek” and is perhaps the most purely likable Marvel hero thus far. Much of the Asgard cast is equally strong, notably Tom Hiddleston as Thor’s nefarious brother. The Earth cast is markedly weaker. As Thor’s love interest, Portman never lets the audience forget she’s acting, while the always adorable Kat Dennings only seems to be in the film to serve as a series of “kids-these-days” punchlines about Facebook.

The film’s story is also pretty weak. Thor’s inevitable redemption never quite feels earned, rather happening because the film needed to get Thor’s hammer back before its big final battle. Thankfully, the film’s final act is its best. A lengthy sequence when one of Loki’s minions wreaks havoc on a small town is visceral and exciting, while the final confrontation in Asgard is appropriately epic.

In the end, the wildly uneven “Thor” may be nothing more than a place-setter for next summer’s “The Avengers.” But thanks to Hemsworth’s strong performance and a few great action scenes, it’s about what audiences going to see a movie about a guy beating people down with a giant hammer should expect.