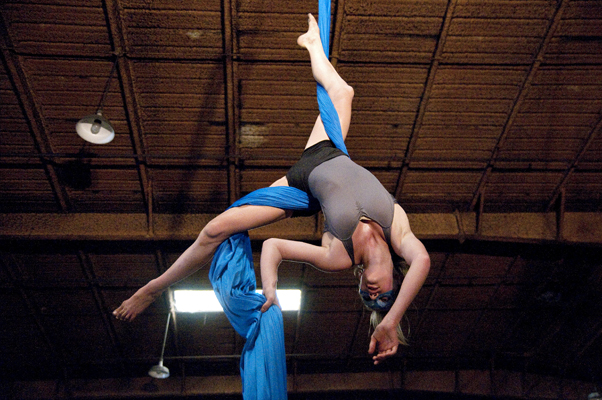 Celeste Myhre, 14, practices choreography on a silk rope in preparation for an aerial dance show for Sky Candy, an arts collective.

During rehearsal, Celeste Myhre wraps her legs around two lengths of blue silk suspended from the roof of the practice warehouse used by the Sky Candy aerial arts collective. After carefully looping the silk around her waists and legs, she releases her hands and plunges downward through billowing fabric until the silk strands tighten around her and gracefully cradle her fall.

Myhre, 14 with a background in ballet, is one of the collective’s advanced students in Sky Candy’s aerial arts classes. Aerial art is a dance form common in circus performance in which artists dance while suspended in the air by a number of different apparatuses, such as ropes, trapezes and silks.

Sky Candy is a performance and teaching collective that was co-founded by Winnie Hsia, Chelsea Laumen, Andy Ange and Jessica Ryan in 2010 to foster interest in the aerial arts in Austin. Sky Candy teaches classes to advanced students and beginners of all backgrounds six days a week at their practice space in East Austin.

“It’s the most dangerous, the most beautiful and one of the most difficult of the circus arts,” Hsia said.

“This is the first time we’ve been able to give someone who is an exceptional student an opportunity to perform in a big way,” Hsia, who produced “The Red Shoes” said.

Laumen conceived and directed the production, but she said the process of putting the performance together has been a collaboration.

“They would come to me with ideas, and I would work with them on the arrangement and with the transitions,” Laumen said.

In the first act of Laumen’s rendition of “The Red Shoes,” a young girl named Karen looses herself deep in a forest where she is seduced by the devil and given a pair of red shoes. With her new shoes on, she is unable to stop dancing and, after abandoning her boyfriend at the town dance, the bewitched shoes lead her down into hell, where the second act takes place.

Different performers play Karen in the production, and each showcases her own skill in the aerial arts. The show includes performances on six different aerial apparatuses: silks, rope, trapeze, chain, pole and an aerial hoop called a lyre.

Sky Candy offers classes for the four main aerial apparatuses ­­— silks, rope, trapeze and hammock — as well as an introductory class. Hsia and Laumen said they designed the introductory class to ensure that students with disparate levels of acrobatic experience would not be clumped together in one class. Both said they knew from their own careers that training with more experienced artists can be discouraging at times.

“You might have zero core strength, you might never work out, but you can still do this,” Hsia said. “We’ll give you an environment that’s more welcoming as opposed to intimidating for your first experience.”

Unlike lifting weights in the gym, the aerial arts develop functional muscle and build body awareness.

“Knowing you can lift a weight this many times is not the same as knowing you can actually lift your body in the air,” Hsia said.

Another perk of using the aerial arts to get fit is that the hard work students put in produces a beautiful product, Laumen added.

“It’s something different, something you can share,” Laumen said. “You have some sort of tangible product at the end of it that you can offer up as art to the world.”