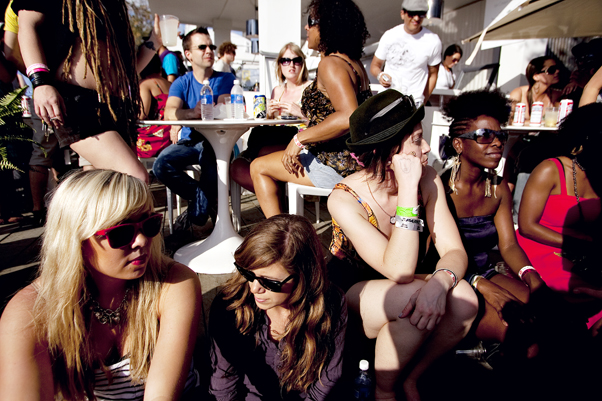 Austinites wait for a band to begin at Fador Fort during the 2011 South By Southwest festival. SXSW brings in $113 million and 200,000 visitors to the city annually.

Each year, five events boost Austin’s economy by about $357 million combined but cause the city to scramble to accommodate visitors and citizens who struggle to get from point A to point B.

Today, the annual Austin Convention and Visitors Bureau Luncheon will celebrate events such as South By Southwest, Austin City Limits, the Texas Relays, Rodeo Austin and UT football games, which bring hundreds of thousands of people to town and millions of dollars into the economy.

The hospitality industry brings in most of the money, although some businesses such as copy shops and production companies also see added revenue, said Beth Krauss, a spokeswoman for the Austin Convention and Visitors Bureau.

When Formula One racing debuts in the fall, Krauss said the event will bring in $300 million and attract 300,000 people to the city. As events grow in popularity, the city must increase hotel space and develop improved methods of transportation, Krauss said.

“Austin could benefit from the construction of a new convention-style hotel,” she said. “We aren’t able to accommodate some of the groups that have grown beyond our current inventory, and we have new customers that want to meet here but need more hotel rooms than we can offer.”

Mayor Lee Leffingwell believes the city needs a new convention center hotel to accommodate visitors brought in by major events such as ACL and SXSW, and others have expressed interest in the project, said mayor’s spokesman Matt Curtis.

For big events such as ACL in locations with little or no access to public transit, such as Zilker Park, Cap Metro usually makes agreements with organizers of the event to provide shuttles or buses that would not normally go to the location, said Cap Metro spokeswoman Misty Whited. For smaller events, Cap Metro examines the areas of transit that are likely to be most utilized and provides supplemental buses, she said.
This year, SXSW posed particularly nasty transportation difficulties, with 2.3 million riders in March, a 7-percent increase over last March, Whited said. Pedestrians, bicyclists and cars all had trouble because of the vast influx of people to the event, she said.

“I don’t know if there was anything that could have been done better,” she said. “There were just so many people. I think maybe as the next one comes around, we’ll come to the table with the city and organizers to talk about possible solutions.”

Cap Metro brings in much of the city’s added revenue during citywide events, whether because of agreements with organizers or just an increase in people riding the buses, she said.

“For events like South By Southwest, we have great ridership,” she said. “Lots of people take advantage of it because it’s easier than sitting in traffic all day.”