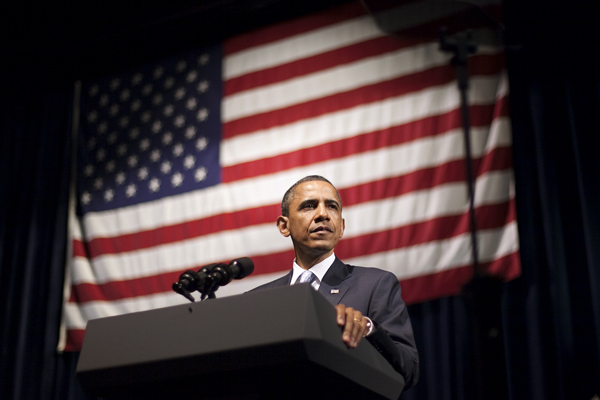 President Barack Obama delivers a speech during a Democratic National Committee fundraiser at The Moody Theater on Tuesday. Tickets for the event cost $1,000, but a limited number were available to students for $44.

President Barack Obama descended on Austin on Tuesday, and the iconic bright blue of Air Force One lit up a stormy sky.

He made two fundraising stops in Austin as part of the earliest stage of his 2012 campaign, which began April 11. At a Democratic National Convention fundraiser at The Moody Theater where ACL Live is recorded, Obama spoke about the economy, education and infrastructure to about 750 paying guests.

Members of University Democrats sat near the back to hear from the president for whom many of them campaigned in 2008. UDems’ Vice President-elect Cameron Miculka said students were able to purchase a limited number of tickets for $44, and group members jumped at the opportunity.

Miculka said he was glad to hear the president mention his successful financial aid reform, for which UDems members lobbied in Washington in 2010.

“[It] is something I can say I’m proud to be a part of, and the president recognized that [it] is such an important milestone for students and an accomplishment for our country,” he said.

Obama won Travis County with 64 percent of the vote in 2008, but not everyone in attendance came out to support the president. Teri and Mark Longstreth awaited Obama’s arrival at Austin-Bergstrom International Airport because their nephew was part of the crew but said they didn’t vote for Obama in 2008.

“I’d never vote for him, but we had a once-in-a-lifetime opportunity to meet an active president, so of course we’re here,” Mark Longstreth said. “Whether I agree with his policies or not, he’s still the president, the leader of the free world.”

Earlier in the day, Obama stopped in El Paso to discuss immigration reform and to ask for support from Republicans. He promised to direct the energy behind deportation programs away from undocumented college students and toward criminals.

Outside the theater, about 20 young people, including several undocumented students, toted signs and demanded accountability from the president. Although the DREAM Act, a bill that would give undocumented students a pathway to citizenship, failed to pass Congress in 2010, UT government senior Daniel Olvera said there are still ways Obama can help.

“He can stop the deportations and grant us administrative relief,” said Olvera, an undocumented student. “We wanted to protest outside of his fundraiser to let him and his supporters know that we are still here and that we want to contribute to this nation. We just asked for him to fulfill the promises he made in 2008.”

Inside, Obama was playing up to his supporters and urged them to keep up their commitment for 2012.

“I want to make sure we’re putting the campaign in your hands — the hands of the same organizers, the same volunteers, the same ordinary people who did extraordinary things the last time around,” he said.