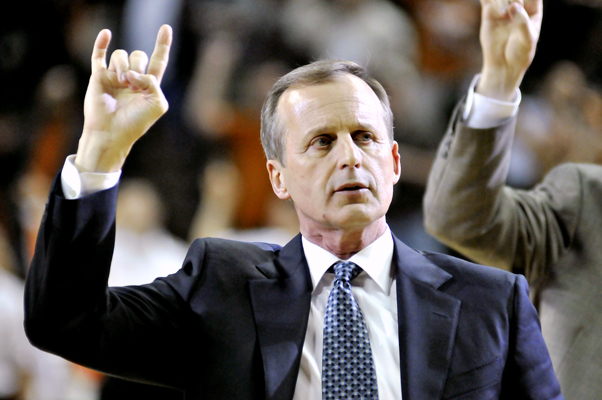 The state is facing a budget shortfall that some estimates put as high as $27 billion. Current spending proposals would cut money for universities and tuition programs for poor students.

“It’s not appropriate, not at a time when we’re scraping for money for education,” said Sen. Jeff Wentworth, a member of the Senate higher education committee.

But Democrats with connections to Texas also chimed in.

Sen. Kirk Watson, whose district includes the Texas campus, said the raise suggests regents are “tone deaf” to the budget crisis boiling at the Capitol less than a mile away.

“I’m a big fan of UT basketball and coach Barnes,” Watson said. “But at a time when everyone up here is fighting to come up with money to pay for education, it was disappointing.”

The Texas athletic budget is separate from the academic budget and Barnes’ raise does not include tax money. Texas officials note that the university’s new $300 million contract with ESPN will send millions of dollars toward academics.

Barnes was owed a $75,000 bump under his current contract. Another $125,000 was added to boost his annual salary to $2.4 million, keeping him among the highest-paid coaches in the country, Texas athletic director DeLoss Dodds said.

“Before Rick Barnes arrived at Texas, we weren’t a top national basketball program. We are now,” Dodds said.

Barnes has averaged 25 wins per season and “runs his program with class and integrity,” Dodds said.

The motion approved by the regents notes Barnes “commitment, motivation and performance” and the desire to keep him coaching the Longhorns.

Barnes isn’t the only state university coach to get a big raise in the current budget crunch. A week after the legislative session convened in January, Texas Tech gave football coach Tommy Tuberville a $500,000 raise, prompting complaints by university faculty in Lubbock.

— This report was written by Jim Vertuno of The Associated Press