It’s common knowledge that trends come and go in modern Hollywood cinema, be it the asteroid craze of 1998 that brought us “Armageddon” and “Deep Impact,” or the alien invasion films that have been clogging up the multiplexes this year. However, it’s very rare that two films so completely identical are released on the same day — “The Art of Getting By” and “Submarine” are virtually indistinguishable from one another.

While these films struggle for originality in their story lines, their strengths are mostly in the margins — small details that might go unnoticed. 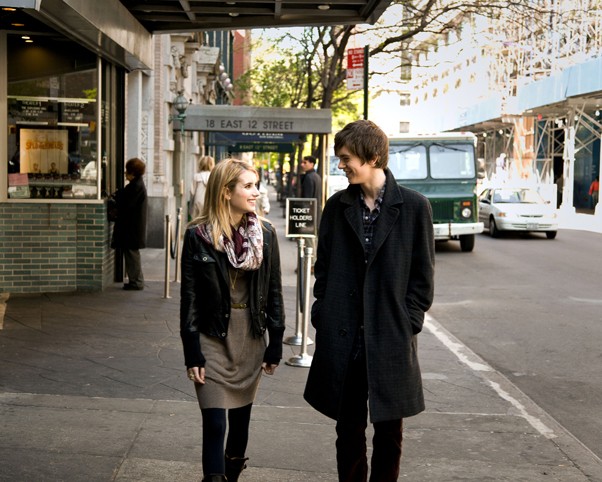 Freddie Highmore and Emma Roberts explore the streets of New York in “The Art of Getting By.” Courtesy of Fox Searchlight

“The Art of Getting By” thrives on small character beats and is refreshingly unafraid to let Emma Roberts’ Sally Howe be an unapologetically awful person at times, a welcome change from the artistic princesses of modern indie cinema. At the same time, “The Art of Getting By” stars Freddie Highmore as George Zinavoy, an impossibly self-aware, socially awkward loner who finds himself struggling to graduate high school while navigating a heart-tugging crush on Sally. George, much more interested in art than schoolwork, finds himself under the wing of Dustin (Michael Angarano). While Dustin’s storyline is beat-by-beat predictable, the film puts a clever and subversive twist on the relationship they develop by having Dustin be wildly untalented and pretentious, rather than a real artist George could learn something from.

“Submarine,” on the other hand, is entirely too obsessed with its small details to find the time to craft a story worth telling. “Submarine” stars Craig Roberts as Oliver Tate, an impossibly self-aware, socially awkward loner who finds himself trying to hold his parents’ marriage together while navigating an out-of-nowhere romance with Jordana Bevan (Yasmin Page). Roberts is the film’s saving grace, perfectly selling the seemingly life-and-death stakes of teenage puppy love and giving his character a likability the script denies him. As Tate’s mother, Sally Hawkins is strong, even as her character is frustrating, and Paddy Considine’s pretentious self-help instructor and homewrecker is endlessly funny.

Unfortunately, almost everything else in “Submarine” is excruciatingly twee, entirely too pleased with itself, and borderline insufferable at times. While “The Art of Getting By” wisely holds back on the voice-over for most of its runtime, “Submarine” is more than content to let Oliver babble at the audience, even pointing out certain camera angles and worn cliches that pop up in the film. While it would be easy to dismiss “Submarine” as a British take on Wes Anderson’s “Rushmore,” that would imply that “Rushmore” isn’t far and away better than that film and that “Submarine” actually has anything worthwhile to add to the catalog of coming-of-age stories.

“The Art of Getting By,” originally titled “Homework,” fares much better, mostly because of its simple story line and presentation. It isn’t too lofty in its ambitions and is all the better because of it, perfectly nailing a few small moments of teen angst without letting them dominate the film and managing to work in snappy, clever dialogue as well. Unfortunately, its plodding, unoriginal story line is only hurt by the lack of weight it’s given, with major narrative conflicts dismissed in the space of a montage and a central relationship that never feels quite right.

While the films are the same, this isn’t really a comment on the unoriginality of studios, but rather a warning to the coming-of-age genre. Yes, all the staples of the coming-of-age film are alive and well here, from the angsty soundtrack to the falling-in-love montages to the overbearing, affected voice-over. In fact, the films end on the exact same note and any romantic scene in either film could just as easily be shoehorned into the other.

Ultimately, both films are absolutely disposable. It’s becoming clearer and clearer with each adolescent quirk-fest how mechanically these films are constructed. As cinemas are overwhelmed with these films, the genre teeters on the edge of a pit of self-parody that both films come entirely too close to. While “The Art of Getting By” executes its tropes with a sure-handed confidence, it’s still a film built from the scraps of many coming-of-age stories that came before it. And “Submarine” is entirely too tickled with itself to sit through. These films serve a purpose nonetheless. They warn writers and directors that, without a fresh vision or some originality, this is a genre that will be exhausted entirely too quickly.