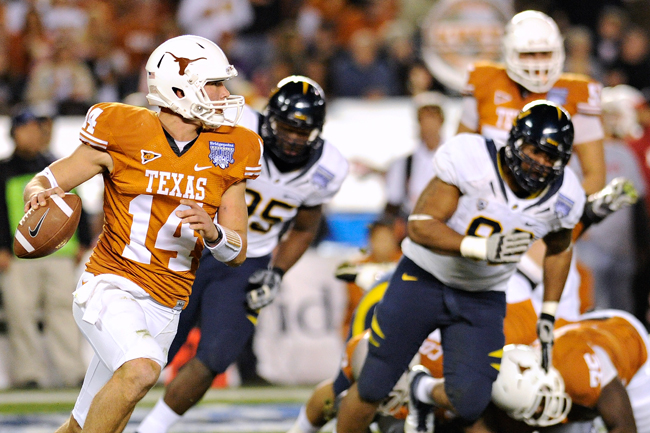 David Ash (14) scrambles away from California defenders in the Holiday Bowl. So be consistent winners, the Longhorns will need better play from their quarterback next season.

Coaches throw the word “consistency” around so much it has a kind of numbing effect. But that’s what Texas needs to develop over the offseason.

There is no other spot that needs to develop consistency more than the one at quarterback. After Garrett Gilbert was out of the picture, Case McCoy and David Ash were both in situations where it was their job to lose – and both lost it. Ash performed poorly against Kansas State, giving way to McCoy, who led the Longhorns to a dramatic come-from-behind victory over Texas A&M this Thanksgiving and played brilliantly in the first half against Baylor before being picked off three times in the second half.

Then, it was Ash’s turn again and the true freshman went on to earn Holiday Bowl MVP honors in a 21-10 win over Cal. He may be the frontrunner heading into the offseason but that does not guarantee him anything.

“You start the best one, that is what you do,” said head coach Mack Brown. “I think they can make great strides. They made David the most valuable player of the game, so they thought he did pretty good. I thought he managed the game as well as could be.”

It will be like déjà vu this offseason. With the arrival of Connor Brewer from Arizona and Jalen Overstreet from Tatum, Texas, there will once again be four quarterbacks fighting for the starting spot – one junior (McCoy), one sophomore (Ash), and two freshmen (Brewer and Overstreet). If Texas wants to get back to being a perennial powerhouse, whoever wins that competition has to last more than the two games that Gilbert did.

Having every wide receiver return, along with several good incoming recruits at that position, including two of the top 35 overall prospects, according to ESPN and Rivals.com (Austin High’s Cayleb Jones and Dallas Skyline’s Thomas Johnson), will help the quarterbacks’ progress as well.

“Our offense will get so much better for next year,” Brown said. “We will have better players around our quarterbacks next year than we did this year. The running backs will be older and healthier and the receivers will be better.”

Staying healthy at running back will also be a must for Texas. Feel free to knock on wood after you read this but there is no way that all three of the Longhorns’ top tailbacks will go down, at least not at the same time like they did this season in Columbia. Even without Fozzy Whittaker, the “heart and soul of the team,” as Brown described him earlier this week, Texas will still have a terrific trio of tailbacks thanks to incoming freshman Jonathan Gray, who broke the national high school record for total touchdowns with his 205th in Aledo’s win over Manvel in this year’s 4A state championship game, the Bearcats’ third straight title.

“When you get hurt, I do not think you ever get it back in a short time,” said Brown. “Joe never practiced full speed. He tried, but he was never 100 percent. Malcolm practiced better than Joe, and I thought you could see the burst on Malcolm’s 16-yard run.”

Texas should get great play along the line of scrimmage next year as all but one starter returns on each the offensive and defensive line with junior college transfers possibly filling both of those holes. There still aren’t a lot of seniors on either unit but there are plenty of young, talented backups that will give Texas considerable depth up front. The Longhorns will have two of the country’s best pass rushers in Jackson Jeffcoat and Alex Okafor, who turned down an opportunity to be drafted in next April’s NFL Draft. And defensive tackles coach Bo Davis and offensive line coach Stacy Searels will finally get a full offseason to work with their players.

Davis and Searels both did tremendous jobs this year but were two of many reasons why the Texas coaching staff was anything but a point of consistency last offseason. Brown hired six new coaches in a two-week span last January and nearly had to hire a seventh (Jerry Gray, who eventually went to coach for Tennessee Titans head coach Mike Munchak) if Duane Akina had taken a job to Arizona’s secondary coach. Thankfully for Brown and his program, nobody from his staff will be resigning, retiring, or taking another job, although co-offensive coordinators Major Applewhite and Bryan Harsin, defensive coordinator Manny Diaz and wide receivers coach Darrell Wyatt all declined chances to interview for head coaching gigs.

The newfound continuity should help Texas maintain a high level of play next year. Texas went 4-0 to start this season before losing to then national title contenders Oklahoma and Oklahoma State, games they were not expected to win, but the Longhorns were up and down for the rest of the year. They dominated Kansas and Texas Tech but couldn’t get past Missouri or Kansas State, played a great game against Texas A&M, but got walloped in Waco before pounding Cal in the Holiday Bowl. If Texas plays to their potential throughout the season, winning 10 games and becoming a perennial powerhouse again will be well within its reach.