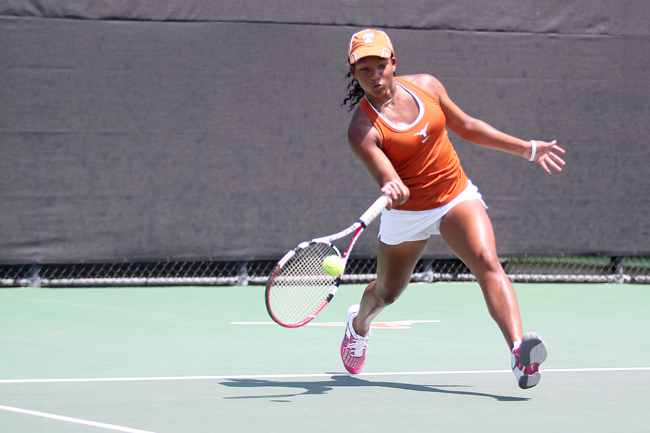 Junior Aeriel Ellis and the rest of the No. 21 Longhorns opened their season with a strong showing in Califorina.

The No. 21 ranked Longhorns started their season with some impressive showings at the National Collegiate Tennis Classic in California this past weekend.

The doubles tandem of freshmen Noel Scott and Lina Padegimaite battled their way through the doubles draw of the tournament, posting three straight wins before falling in the finals to Virginia’s Emily Fraser and Li Xi, 5-8.

Players posting wins the round of 32 in the singles draw included freshman Alex Martin, sophomores Juliana Gajic and Elizabeth Begley, as well as Scott and Padegimaite. Scott and Martin went on to post victories in the round of 16.
Other Longhorns that saw singles action on the first day included senior Carlene Leyden, sophomore Cierra Gaytan-Leach and freshman Annat Rabinovich.

In the singles quarterfinals junior Aeriel Ellis defeated teammate Martin, while Scott was defeated in her match. Ellis went on to lose in the semifinals, 4-6,2-6, to Fraser of Virginia.

Next up for the Longhorns is a tough stretch of matches with No. 9 Virginia due up this Saturday followed by No. 4 North Carolina on Sunday in New York.

Conference competition won’t be much easier, as Texas will face No. 6 ranked Baylor in Austin, while traveling to No. 25 Oklahoma and No. 29 Texas A&M. Last year the Longhorns beat Kansas State and Oklahoma before falling to the Texas A&M in the conference tournament, then went on to lose to No. 7 Miami in the second round of the NCAA Championships. The Longhorns finished the season ranked No. 23.