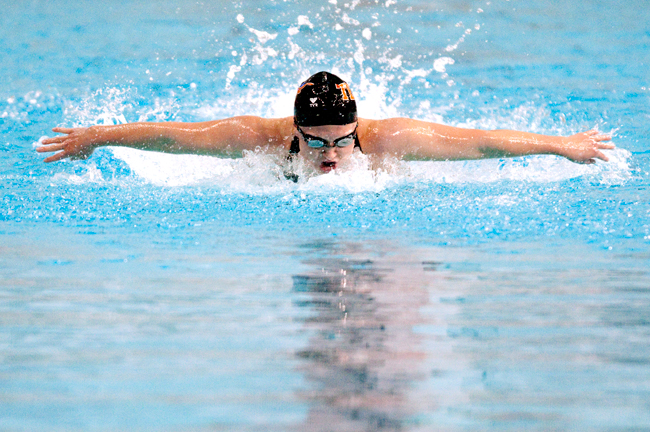 Freshman Kait Pawlowicz swims the 200 fly during a meet against Georgia over winter break. The break proved fruitful for both the mens and womens squads as both teams came away with numerous individaul event wins, the men went 2-0 as a team and the women went 1-1.

The holidays are a time for fun, gifts and happiness. Winter break brought all of these for the Longhorns.

The No. 2 ranked men’s swimmers and divers were dominant over the break, defeating No. 9 Georgia and No. 7 Auburn by 35 and 30 points, respectively.

The seniors made the most of senior day in their meet with Georgia as Jimmy Feigen lead the charge by winning the 50 and 100 freestyles. Eric Friedland and Neil Caskey also won two events apiece. All three swam on the winning 200 medley relay team.

The men followed this win up the next week with their most impressive performance of the year in a dual meet with the Auburn Tigers.

“This was one of the best overall dual meet efforts by our team in a long time, maybe in the last three or four years,” said head coach Eddie Reese. “This was a great step for us. We are being led by a great group of seniors and everybody is doing a great job competing.”

Friedland and Feigen swam very well, each placing first in two events. Jackson Wilcox looked great as well, notching the fastest time in the country so far this year in the 1000 freestyle with a time of 9:01.22.

Cooper won the 1-meter diving event while Livingston emerged victorious in the 3-meter diving event. Other individual winners were Hill and Caskey, who won the 200 freestyle and the 200 butterfly events, respectively.

The women tasted both victory and defeat this holiday break, beating top ranked Georgia while losing to Auburn.

In an impressive effort on senior day, the Longhorns became the first team to beat Georgia in the last two years with a 155-145 victory.

“It was a great way to send off the seniors,” said head coach Kim Brackin. “They are five really great kids who have made an impact on the program, not just scoring points but the people they are so it was fun to see them enjoy that last home meet experience.”

Senior Karlee Bispo proved why she’s a captain as she swept all three freestyle events of the meet. Laura Sogar looked dominant as well, winning both the 100 and 200 breaststrokes events.

Other individual winners were Leah Gingrich in the 200 butterfly and Shelby Cullinan in the 3-meter diving event. The Longhorns also earned points with a victory in the 200 medley relay.

In the meet with Auburn, the ladies lost in a tough fashion that saw inconsistency doom the No. 4 ranked team in the nation.

Bispo who placed first in both the 200 freestyle and 200 IM events was a bright spot for the Longhorns. Other winners were Sogar, Lily Moldenhauer and Kaitlin Pawlowicz who each won an event.

Both the men and women will continue their seasons Jan. 28 in a meet with the Arizona Wildcats.

Printed on Wednesday, January 18, 2012 as: Winter break was successful in the pool for the Longhorns