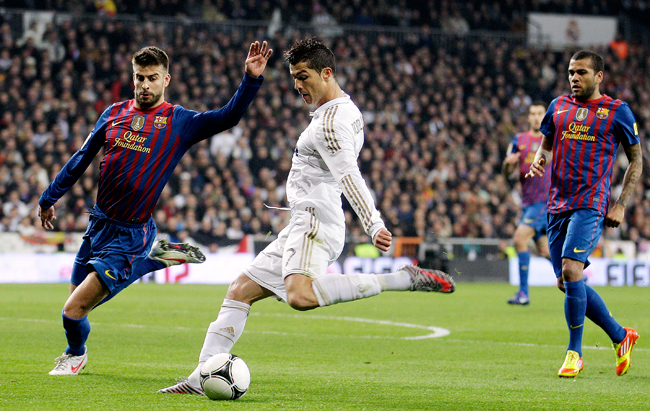 The biggest story of the Copa del Rey quarterfinals, a matchup between Barcelona and Real Madrid, dubbed El Clasico, ended with a 2-1 Barcelona victory in this first leg.

Éric Abidal notched the first and Carlos Puyol headed in the second to seal the deal against their longest rival.

Cristiano Ronaldo managed a goal for Real Madrid, but last year’s champions will have to try to take the second game of the series or risk elimination.

Just under five months since the infamous Spanish tournament started, there are only eight teams left. The Copa del Rey, or King’s Cup in English, is currently in the quarterfinals stages. The Copa has been around since 1902, however this is the 108th year of play.

The nine-month tournament which started last August and ends in May is comprised of 84 teams exclusively from Spain and is intended to crown the nation’s best team. The tournament is a combination of four different leagues: La Liga, Segunda División, Segunda División B and Tercera División. La Liga, the best league in Spain, doesn’t come in until the Round of 32 while the lower three leagues battle for a spot to just advance and play for a shot at the final phase in the first three rounds.

Starting in the Round of 32, each matchup consists of a home-and-home series, the overall winner of which moves onto the Round of 16 where they also play two games per matchup.

Currently the tournament is in the quarterfinals with Espanyol matched up against Mirandes, Athletic Bilbao with Mallorca, Valencia with Levante and Real Madrid with Barcelona. Only three games in this round have been played, Espanyol already beat Mirandes 3-2 in their first leg, Athletic Bilbao beat Mallorca 2-0 and Barcelona beat Real Madrid 2-1 on Wednesday.

The biggest story of this round was yesterday’s “El Clasico,” the matchup between Barcelona and Real Madrid. The two longtime rivals played last year in the finals of the Copa del Rey. Real Madrid took the title, making it their 18th championship in the history of the tournament. Barcelona, who currently holds the most championships wins at 25, looks to make up for their loss last year with another championship run this year. One more win against Real Madrid in these quarterfinal games takes them to the semifinals where they look to move onto the finals and get their 26th championship win.

Another big story is Mirandes. This team from the community of Castilles and Leon is the only team still alive that isn’t from La Liga. They are in the Segunda División B, which had 26 representatives in the initial field of 84. The last time a non-La Liga team won Copa del Rey was in 1927. The team, Real Union, was also from Segunda División B.