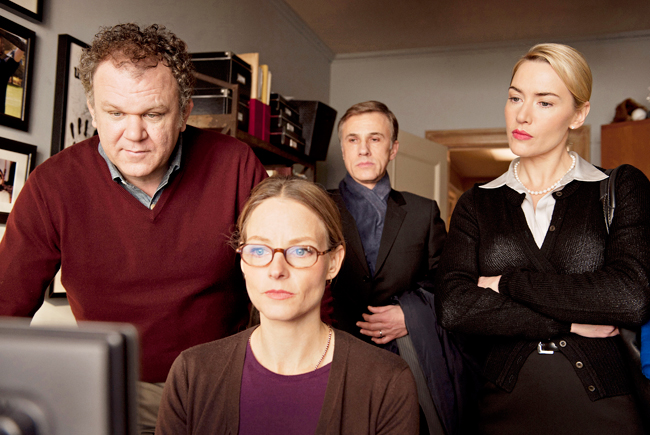 The ensemble cast of Carnage, from left to ri

Stage-to-screen adaptations are always a tricky endeavor, and it’s all too easy for directors to find themselves restrained by their material’s inherent staginess, which can sometimes result in films that are entirely too lifeless and muted, or packed with big, loud performances that would be great on Broadway but grate on screen. Thankfully, Roman Polanski’s “Carnage,” while not quite able to be a fully cinematic experience, works just as well on film as it does on stage.

When a schoolyard tiff turns ugly and a participant ends up down a few teeth, the parents of the two boys involved meet for a mediation of sorts in a swanky Manhattan apartment. Polanski’s most brilliant stroke in “Carnage” is his casting, and he manages to find perfect fits for each of his script’s four principal roles.

Jodie Foster has rightfully been receiving a lot of attention for her performance, especially for a loud, near-breakdown moment where she truly gets to cut loose in a hurricane of insults, profanity and veins sticking out of her forehead.

However, Kate Winslet is wildly entertaining and makes for a hilarious drunk, and John C. Reilly’s interplay with Christoph Waltz is perhaps the film’s most reliable source of laughs. Meanwhile, Waltz steals the show, making his smarmy, cellphone obsessed businessman almost likeable despite being a massive bastard.

Polanski is stylistically reined in by the single setting of “Carnage,” but the director seems more than content to sit back and let his actors spar, and he keeps the film moving quickly. At a brisk 79 minutes, “Carnage” never stops to take a break, always throwing its characters into new conflicts with each other, and by the time it reaches its close, watching these four strong actors bounce off one another hasn’t even begun to get old.

“Carnage” may not be as strong as its source material simply because it’s better-suited to the stage, but Polanski has produced a caustically hilarious, brilliantly cast film — a more than valid excuse to watch four of Hollywood’s best actors go head-to-head.