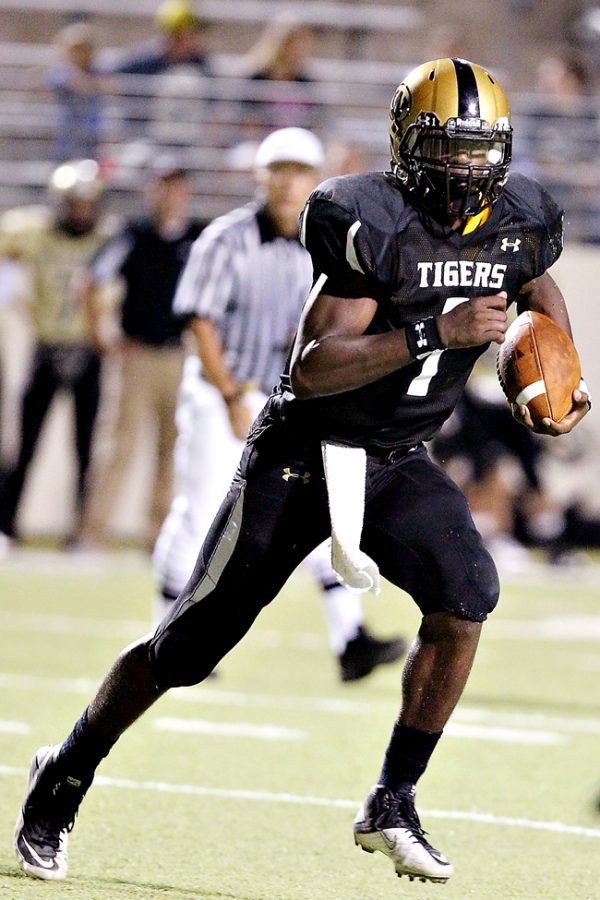 As one recruiting cycle for the class of 2012 is starting to come to an end, the process for the class of 2013 is about to hit full-stride. Every February, colleges around the nation invite their respective state’s top high school juniors to tour the campus and football facilities and also gives them an opportunity to meet with current players and coaches. In the fast-paced world of college football recruiting, junior days are indispensable to a team’s coaching staff. They allow programs to form a bond with a player long before other schools and can influence a prospective target’s college choice immensely.

Jason Howell of Orangebloods.com confirmed that two standout juniors will have attended the Longhorns’ junior day being held Feb. 12. The first is dual-threat quarterback from 2A Whitewright, Tyrone Swoopes, who is listed at 6-foot-5, 220 pounds and runs a 4.59 second 40-yard dash. Bartender! I’ll take a Vince Young, minus the aging please. Calling him the next Vince may be a stretch at this stage, but the potential, especially with such a young player, can easily be developed.

Swoopes is already being pursued by teams like Oklahoma, Notre Dame, Oregon, Stanford — you get the point, right? He’s really, really good. So good that he’s already received six DI scholarship offers. Odds are he’ll get another offer from Mack Brown come Feb. 12, as well.

He could even elect to make a verbal commitment to Texas during his time on the 40 Acres. Before Texas fans get too excited, more than once players have wavered on early verbal commitments and entertained other offers as they prepare to graduate. But for the same reason that juniors making verbal pledges to a university at such events is something to be wary of, it could also be a harbinger for a good relationship with a recruit. If a program can get to a player early enough and make them feel at home, both on and off the field, then the chances of that prospect signing rises exponentially.

The other junior that Texas is keeping a close eye on is Jake Raulerson. Raulerson checks in at 6-foot-5, 290 pounds and also has a few scholarship offers of his own — 20 to be exact. Hailing from Celina, he’s regarded as one of the top offensive and defensive lineman prospects in the nation, and he’s happy playing either position. Raulerson has already become one of the most sought after lineman in the country, and the Longhorns would love to snag him if at all possible.

They’re certainly on the right track. According to Orangebloods.com, Raulerson is scheduled for an unofficial visit to Austin on Jan. 27 and then he will also be in town in early February for junior day. The Longhorns’ junior day is the only one Raulerson will be attending. As of now, it seems as if Texas is high on his list of potential choices, and there’s always a possibility he could make a commitment while on campus.

These two talented athletes will join 16 others on junior day and any number of them could make commitments, which would bode well for Texas’ 2013 recruiting class. There’s still tons of time until these guys sign, but bringing in two prospects like Swoopes and Raulerson could be a sign of good things to come for the Longhorns.

Look for more recruiting news on our “Keeping Score” blog.