Longhorns look to move up the conference standings against Oklahoma 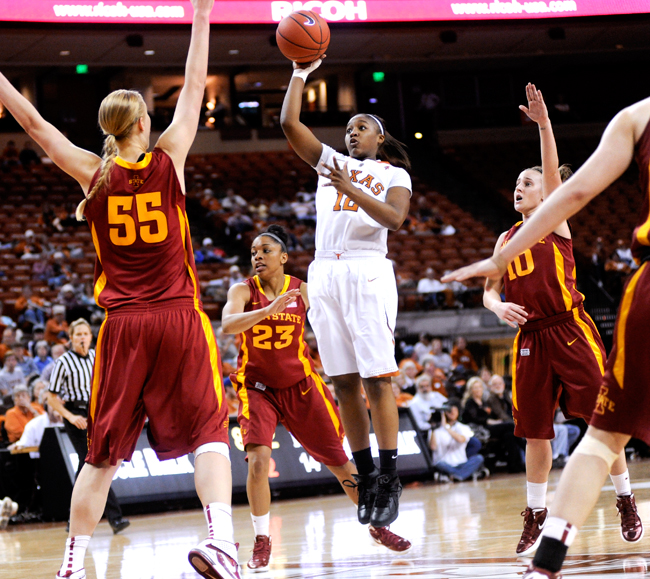 Yvonne Anderson has been crucial for the Longhorns this season and had a game winning shot with one second left in Texas win over Iowa State on Saturday. She and the other seniors will be vital in Texas tough conference match up against Oklahoma.

Coming off a close victory over a feisty Iowa State squad, the Longhorns will look to get to the .500 mark in conference play this Saturday against the Oklahoma Sooners.

Both Texas (12-5, 2-3 Big 12) and Oklahoma (11-5, 3-2 Big 12) have struggled to string together wins early on in conference play. A Longhorn win would tie them with the Sooners in the Big 12 and give the team the opportunity to put together a win streak with upcoming games against Missouri (0-5 Big 12) and Texas Tech (2-3 Big 12), two teams whose records put them in the bottom half of the conference standings.

“I’ve looked at Oklahoma’s record in the Big 12 this year and they’ve been win-loss, win-loss as well,” said Texas head coach Gail Goestenkors. “So something’s got to give. It’s going to be a battle up in Norman.”

Since being blown out 75-58 by Texas A&M, the Sooners’ last three contests have all been decided by eight points or less, two of which were decided by just three points.

The biggest challenge for the Longhorns on Saturday afternoon will be stopping Aaryn Ellenberg and Oklahoma’s guard-heavy scoring attack. Ellenberg, a sophomore from Las Vegas, leads the Big 12 with 48 three-pointers and ranks third in conference in scoring, averaging 18.2 points a game. Her .444 three-point shooting percentage ranks her 12th in the nation.

Redshirt junior Whitney Hand and sophomore Morgan Hook round out the Sooners’ backcourt and are second and third, respectively, among the team’s leading scorers. Hand, whose 6-foot-1-inch frame makes her one of the tallest guards in the country, also leads the team in assists and is second in rebounding.

Texas will have to rely on seniors Yvonne Anderson and Ashleigh Fontenette’s veteran leadership to force the Sooner guards to look for the pass and create turnovers.

Anderson is currently fifth in the conference averaging just under three steals per game.

Although sophomore post Cokie Reed’s status remains uncertain, the Longhorns, who head to Norman with a mediocre 2-2 record on the road this year, should have the advantage in the paint.

The Sooners will be without their leading rebounder and highest scoring post, Joanna McFarland. The 6-foot-3-inch junior is out indefinitely after suffering a broken jaw late in the game against Oklahoma State last Saturday. McFarland is averaging 8.7 points and 8.1 rebounds in 15 starts for the Sooners this year.

Texas will need to capitalize on its rare advantage down low and win the rebounding battles in order to give themselves a chance to win Saturday’s important conference matchup.

Printed on Friday, January 20, 2012 as: Seniors needed for success against Sooners