‘Red Tails’ aims for the sky, but loses momentum with simplicity 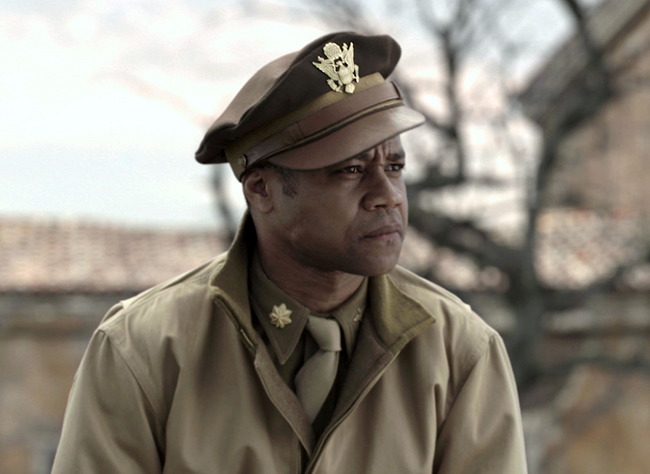 “Red Tails” has the potential to be a landmark film for many reasons. First off, it’s a film that George Lucas has been prodding into theaters since the 1980s, and it represents a true passion project and possible redemption for the man who both created and ruined “Indiana Jones” and “Star Wars.” It also happens to be the first blockbuster in recent memory featuring an all-black cast. No one can deny “Red Tails” has its heart in the right place, and while its attempts to do to the Tuskegee Airmen what “Remember the Titans” did to high school football are certainly noble in spirit, the film undercuts itself at every turn, more than content to let its episodic, predictable story play out in the least interesting way possible.

Based on the true story of the Tuskegee Airmen, “Red Tails” focuses on a squadron of fighter pilots led by Major Stance (Cuba Gooding Jr.) and Colonel Bullard (Terrence Howard). Faced with World War II-era racism, pilots such as Lightning (David Oyelowo), Maurice (Michael B. Jordan) and Junior (Tristan Wilds) struggle to overcome adversity and prove their dominance both in the skies and on the ground.

“Red Tails” director Anthony Hemingway cut his teeth directing TV shows like “True Blood” and “Treme,” and his history on “The Wire” is reflected in the film’s cast. Alumni like Wilds, Jordan and Andre Royo pop up, but all are underserved by the film’s lackluster script. “Red Tails” is at its best when its characters take to the skies, but even then, the film’s dialogue remains embarrassingly bad. However, the special effects are great, treating the space above the clouds with an infectious sense of wonder, and when “Red Tails” lets its characters do what they do best, the film takes on a kinetic energy and intensity that disappears as soon as the planes land.

“Red Tails” tries to give every character, no matter how minor, an arc, and every one is unsatisfying. For example, Jordan’s character shows up early in the film to state his intentions to become a fighter pilot, has a few scenes building toward that end and quickly disappears from the film until its climax. The film’s score is equally useless, only popping up at a few moments to call undue attention to itself.

Just as clumsy is the film’s take on race, which is toothless and utterly lacking in any sort of subtlety. Every white character is one-note and racist, and the film moves through their inevitable redemption like checking off boxes on a list until the characters learn that black fighter pilots aren’t so bad after all! Even worse is the film’s treatment of Bryan Cranston, who shows up for two scenes to play a mustache-twirling villain before vanishing (and seemingly being replaced by Gerald McRaney).

“Red Tails” is a tonal mess, and its bizarre editing means that storylines featuring a POW camp, a wholly non-verbal romance, and every character’s struggles with racism are all jumbled together like ingredients in a casserole. Even so, its skybound scenes are undeniably impressive, and when “Red Tails” aims high, it often soars, making the inevitable crash back to mediocrity painful to watch.