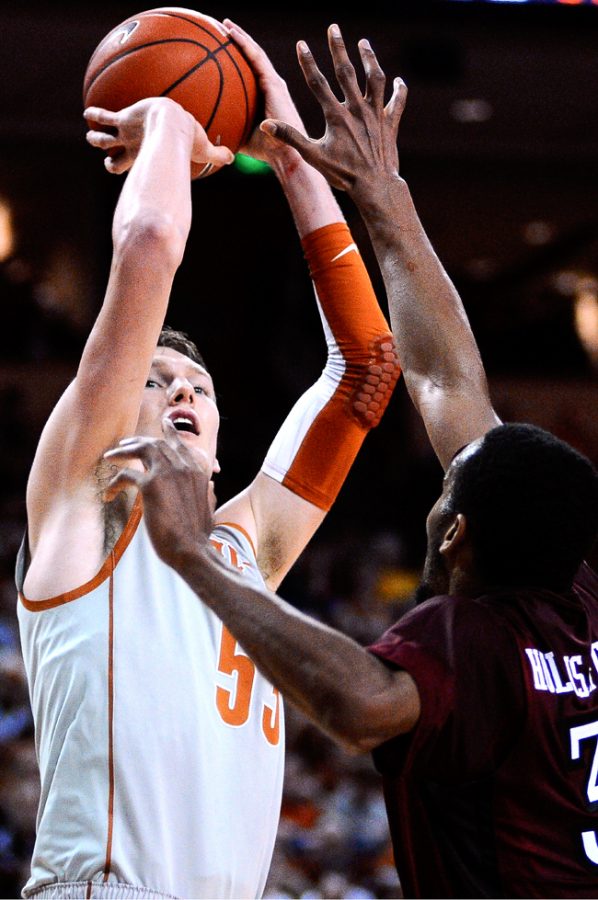 Clint Chapman scored 11 points during Texas loss to Kansas State. Chapman and the other veteran Longhorns will have to play their best to compete with Kansas.

As if things couldn’t get any tougher for the Longhorns, now they have to prepare for a battle against one of the most storied programs in college basketball, No. 7 Kansas.

Coming from a heartbreaking loss to Kansas State marred with turnovers, Texas dropped to 2-3 in Big 12 play while Kansas is fresh off a victory against the third best team in the country, Baylor. Everyone knows head coach Rick Barnes is dealing with a young squad, but the expected growing pains are really starting to hurt.

“They overpowered us inside,” Barnes said after the 84-80 loss to Kansas State. “But we fought.”

Against Kansas, it is going to take more than just the fighting spirit to pull off the upset. It’ll take a great deal of maturity and patience. Kansas only averages marginally higher numbers in most statistics, with a point or two more here and there, a few more rebounds and a couple more assists a game. But those extra passes on offense and the will to snag another rebound is what separates the boys from the men in college basketball.

And how do you prepare for yet another killer game in a murderous schedule?

“You tell [your players] that is why they came to Texas,” assistant coach Chris Ogden said.

Texas will need yet another contribution from its star and veteran leader, J’Covan Brown, who averages a league-best 19.2 points a game. Brown, who has been battling an ankle injury, is accompanied by a cast of talented role players who are learning on the fly what it is like to play Big 12 basketball week-in and week-out.

One freshman who has emerged as a viable secondary scoring threat is Sheldon McClellan. Against the Wildcats, McClellan notched 19 points to go along with three rebounds. Though his team is younger than most in the Big 12, he still feels that any player on the Longhorns’ squad can put up big numbers when they play within Barnes’ system.

“We have to look for open shots on the offense, not take too many one-on-ones. We just got to use each other and help each other,” McClellan said. “Everyone on this team is capable of making 20 points a night.”

One player who won’t need a 20-point performance but is certainly due for another big rebounding game, is senior forward Clint Chapman. Chapman is one of Texas’ only big men and he has, at times, given Texas a threatening big man’s edge with his ability to score and rebound. The only problem is that it has come in bunches. He had a nice 11 points and five rebounds off the bench against Kansas State but was rendered ineffective a week before against Missouri, managing only six points and four boards as a starter that game.

Whether Barnes elects for him to start or ride pine at the get-go against the Jayhawks, he is that X-factor contributor whose veteran leadership needs to show more.

Kansas, meanwhile, has its pieces in place to make yet another run at a Big 12 and even national title. The Jayhawks just beat the No. 3 Baylor Bears and are oozing with confidence.

The Jayhawks are stacked with experience and speed top to bottom. Thomas Robinson and Taylor average 17.8 and 16.2 points a game, respectively, good for second and fifth best in the conference. Robinson’s 12 rebounds a game is good for tops in the league. Texas’ nearest competitor in this category is freshman Jonathan Holmes, who pulls down about 5.3 boards a night.

Texas has its work cut out for itself in tomorrow afternoon’s game. A win would prove the Longhorns have the capability to play to their potential, a mark some thought Texas would have reached sooner, but a loss would mean yet another drop in the conference rankings and the affirmation that it is going to be a long year in the Big 12.