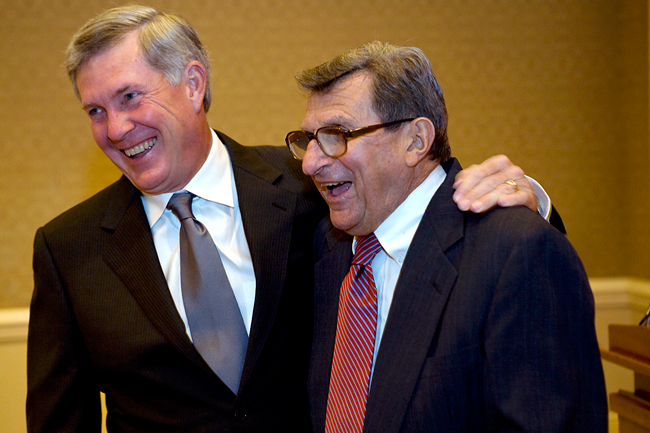 Texas football coach Mack Brown, left, greets Joe Paterno in May 2008 when Paterno was the keynote speaker at a Texas event where Brown was presented with The Mack Brown Distinguished Chair for Leadership in Global Affairs. Paterno was 3-2 against UT but never faced Brown.

STATE COLLEGE, Pa. — Happy Valley was perfect for Joe Paterno, a place where "JoePa" knew best, where he not only won more football games than any other major college coach, but won them the right way: with integrity and sportsmanship. A place where character came first, championships second.

Behind it all, however, was an ugly secret that ran counter to everything the revered coach stood for.

Paterno, a sainted figure at Penn State for almost half a century but scarred forever by the child sex abuse scandal that brought his career to a stunning end, died Sunday at age 85.

His death came just over two months after his son Scott announced on Nov. 18 that his father had been diagnosed with a treatable form of lung cancer. The cancer was found during a follow-up visit for a bronchial illness. A few weeks later, Paterno broke his pelvis after a fall but did not need surgery.

Paterno had been in the hospital since Jan. 13 for observation after what his family called minor complications from his cancer treatments. Not long before that, he conducted his only interview since losing his job, with The Washington Post. Paterno was described as frail then, speaking mostly in a whisper and wearing a wig. The second half of the two-day interview was conducted at his bedside.

His family released a statement Sunday morning to announce his death: "His loss leaves a void in our lives that will never be filled."

"He died as he lived," the statement said. "He fought hard until the end, stayed positive, thought only of others and constantly reminded everyone of how blessed his life had been. His ambitions were far reaching, but he never believed he had to leave this Happy Valley to achieve them. He was a man devoted to his family, his university, his players and his community."

Paterno built a program based on the credo of "Success with Honor," and he found both. The man known as "JoePa" won 409 games and took the Nittany Lions to 37 bowl games and two national championships. More than 250 of the players he coached went on to the NFL.

"He will go down as the greatest football coach in the history of the game," Ohio State coach Urban Meyer said after his former team, the Florida Gators, beat Penn State 37-24 in the 2011 Outback Bowl.

Paterno roamed the sidelines for 46 seasons, his thick-rimmed glasses, windbreaker and jet-black sneakers as familiar as the Nittany Lions' blue and white uniforms. He won 409 games and two national championships.

The reputation he built looked even more impressive because he insisted on keeping graduation rates high while maintaining on-field success.

But in the middle of his 46th season, the legend was shattered. Paterno was engulfed in a child sex abuse scandal when a former trusted assistant, Jerry Sandusky, was accused of molesting 10 boys over a 15-year span, sometimes in the football building.

Paterno at first said he was fooled. But outrage built quickly when the state's top cop said the coach hadn't fulfilled a moral obligation to go to the authorities when a graduate assistant, Mike McQueary, told Paterno he saw Sandusky with a young boy in the showers of the football complex in 2002.

At a preliminary hearing for the school officials, McQueary testified that he had seen Sandusky attacking the child with his hands around the boy's waist but said he wasn't 100 percent sure it was intercourse. McQueary described Paterno as shocked and saddened and said the coach told him he'd "done the right thing" by reporting the encounter.

Paterno waited a day before alerting school officials but never went to the police.

"I didn't know which way to go … and rather than get in there and make a mistake," Paterno said in the Post interview.

"You know, (McQueary) didn't want to get specific," Paterno said. "And to be frank with you I don't know that it would have done any good, because I never heard of, of, rape and a man. So I just did what I thought was best. I talked to people that I thought would be, if there was a problem, that would be following up on it."

When the scandal erupted in November, Paterno said he would retire following the 2011 season. He also said he was "absolutely devastated" by the abuse case.

"This is a tragedy," he said. "It is one of the great sorrows of my life. With the benefit of hindsight, I wish I had done more."

But the university trustees faced a crisis, and in an emergency meeting that night, they fired Paterno, effective immediately. Graham Spanier, one of the longest-serving university presidents in the nation, also was fired.

Paterno was notified by phone, not in person, a decision that board vice chairman John Surma later regretted, according to Lanny Davis, an attorney retained by the trustees as an adviser.

The university handed the football team to one of Paterno's assistants, Tom Bradley, who said Paterno "will go down in history as one of the greatest men, who maybe most of you know as a great football coach."

"As the last 61 years have shown, Joe made an incredible impact," said the statement from the family. "That impact has been felt and appreciated by our family in the form of thousands of letters and well wishes along with countless acts of kindness from people whose lives he touched. It is evident also in the thousands of successful student athletes who have gone on to multiply that impact as they spread out across the country."

Paterno believed success was not measured entirely on the field. From his idealistic early days, he had implemented what he called a "grand experiment" — to graduate more players while maintaining success on the field.

He was a frequent speaker on ethics in sports, a conscience for a world often infiltrated by scandal and shady characters.

The team consistently ranked among the best in the Big Ten for graduating players. As of 2011, it had 49 academic All-Americans, the third-highest among schools in the Football Bowl Subdivision. All but two played under Paterno.

"He teaches us about really just growing up and being a man," former linebacker Paul Posluszny, now with the NFL's Jacksonville Jaguars, once said. "Besides the football, he's preparing us to be good men in life."

Paterno certainly had detractors. One former Penn State professor called his high-minded words on academics a farce, and a former administrator said players often got special treatment. His coaching style often was considered too conservative. Some thought he held on to his job too long, and a move to push him out in 2004 failed.

But the critics were in the minority, and his program was never cited for major NCAA violations. The child sex abuse scandal, however, did prompt separate investigations by the U.S. Department of Education and the NCAA into the school's handling.

Paterno played quarterback and cornerback for Brown University and set a defensive record with 14 career interceptions, a distinction he still boasted about to his teams in his 80s. He graduated in 1950 with plans to go to law school. He said his father hoped he would someday be president.

But when Paterno was 23, a former coach at Brown was moving to Penn State to become the head coach and persuaded Paterno to come with him as an assistant.

"I had no intention to coach when I got out of Brown," Paterno said in 2007 in an interview at Penn State's Beaver Stadium before being inducted into college football's Hall of Fame. "Come to this hick town? From Brooklyn?"

In 1963, he was offered a job by the late Al Davis — $18,000, triple his salary at Penn State, plus a car to become general manager and coach of the AFL's Oakland Raiders. He said no. Rip Engle retired as Penn State head coach three years later, and Paterno took over.

At the time, the Lions were considered "Eastern football" — inferior — and Paterno courted newspaper coverage to raise the team's profile. In 1967, PSU began a 30-0-1 streak.

But Penn State couldn't get to the top of the polls. The Lions finished second in 1968 and 1969 despite perfect seasons. They were undefeated and untied again in 1973 at 12-0 again but finished fifth. Texas edged them in 1969 after President Richard Nixon, impressed with the Longhorns' bowl performance, declared them No. 1.

"I'd like to know," Paterno said later, "how could the president know so little about Watergate in 1973, and so much about college football in 1969?"

A national title finally came in 1982, after a 27-23 win over Georgia at the Sugar Bowl. Another followed in 1986 after the Lions picked off Vinny Testaverde five times and beat Miami 14-10 in the Fiesta Bowl.

They made several title runs after that, including a 2005 run to the Orange Bowl and an 11-1 season in 2008 that ended in a 37-23 loss to Southern California in the Rose Bowl.

In his later years, physical ailments wore the old coach down.

Paterno was run over on the sideline during a game at Wisconsin in November 2006 and underwent knee surgery. He hurt his hip in 2008 demonstrating an onside kick. An intestinal illness and a bad reaction to antibiotics prescribed for dental work slowed him for most of the 2010 season. He began scaling back his speaking engagements that year, ending his summer caravan of speeches to alumni across the state.

Then a receiver bowled over Paterno at practice in August, sending him to the hospital with shoulder and pelvis injuries and consigning him to coach much of what would be his last season from the press box.

"The fact that we've won a lot of games is that the good Lord kept me healthy, not because I'm better than anybody else," Paterno said two days before he won his 409th game and passed Eddie Robinson of Grambling State for the most in Division I. "It's because I've been around a lot longer than anybody else."

Paterno could be conservative on the field, especially in big games, relying on the tried-and-true formula of defense, the running game and field position.

Paterno and his wife, Sue, raised five children in State College. Anybody could telephone him at his modest ranch home — the same one he appeared in front of on the night he was fired — by looking up "Paterno, Joseph V." in the phone book.

He walked to home games and was greeted and wished good luck by fans on the street. Former players paraded through his living room for the chance to say hello. But for the most part, he stayed out of the spotlight.

Paterno did have a knack for jokes. He referred to Twitter, the social media site, as "Twittle-do, Twittle-dee."

He also could be abrasive and stubborn, and he had his share of run-ins with his bosses or administrators. And as his legend grew, so did the attention to his on-field decisions, and the questions about when he would hang it up.

Calls for his retirement reached a crescendo in 2004. The next year, Penn State went 11-1 and won the Big Ten. In the Orange Bowl, PSU beat Florida State, whose coach, Bobby Bowden, was eased out after the 2009 season after 34 years and 389 wins.