Texas offense has to stop its total reliance on Brown 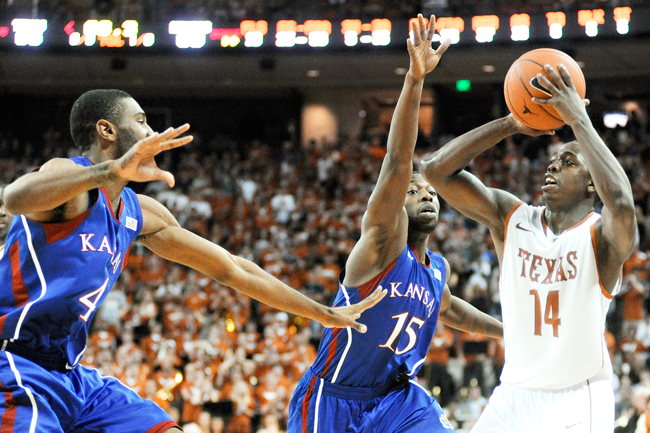 J'Covan Brown fights through a double team Saturday against Kansas. The junior guard is shooting 27.8 percent over his last two games.

The final shot and the range of emotions that can come with it are what people remember looking back on games, and lately for Texas, all of those last-second memories have been painful.

They have lost two straight contests in the last minute, botching a handoff on the final possession against Kansas State and failing to convert on a last second three-pointer on Saturday against Kansas.

Both possessions were mishandled in one way or another by Texas, but after the way the offense had been playing previously, it was not totally unexpected.

Right now, the offense is stagnant. Too often the Longhorns will wind down the shot clock by passing the ball around the perimeter, then give it to J’Covan Brown with around 15 seconds remaining expecting him to make a play.

Many times he has delivered in those situations. He is the leading scorer in the Big 12 at 19.5 points a game, and has put a young Texas squad on his back on multiple occasions this season.

But the Longhorns’ heavy reliance on Brown has its flaws. Often players will pass up an open shot to get the ball to Brown, and he is not scared to take it. He has averaged 27 field goal attempts in his last two games while shooting a paltry 27.8 percent from the field.

The team exemplified this reliance on Brown in the last minute of the Kansas State game. Freshman point guard Myck Kabongo forced a handoff to Brown at half court resulting in a turnover, costing the team the opportunity to win the game.

“J’Covan is a terrific shooter,” Kabongo said. “He is the best player on our team, so of course the team is going to be on him defensively. I should have tried to get the ball to him through the back door or get him open a different way.”

It also seems that at times, Brown will feel he has to make a spectacular play despite the double team many opponents send his way, instead of taking advantage of it and finding the open man. But Brown knows his team needs him to put the ball in the hoop, so he puts up an unwise shot anyway.

However, this idea the team has that the whole possession needs to run through Brown has to change. Not only in the last few minutes of the game, but early on as well. The Longhorns will often get off to slow starts because they throw up jump shots from the perimeter instead of looking for easy scoring opportunities in the paint.

This Texas team is small, but they can still get the ball inside. Forwards like Clint Chapman have the ability to put the ball in the hoop, as he showed in his 15-point performance against a strong Kansas front line.

The guards have a role to play inside as well. They need to make a more conscious effort to drive the ball into the lane looking to create, instead of staying on the perimeter and settling for jump shots. This issue was clear to head coach Rick Barnes during the first half of the Kansas game.

“I think the other guys do not realize how hard they need to work to get open,” he said. “I told the team at halftime that at some time we would have to throw the ball inside. Early in the game we wanted to run hard and post up. I can tell you those guys were there, and we never even looked at them. Those are the plays we need to make. It’s a game plan.”

Moving forward there will have to be a change of attitude for this team to be successful. The offense cannot just revolve around Brown. If it doesn’t happen, Texas’ poor offense may cause them to miss the NCAA tournament for the first time in 14 years.