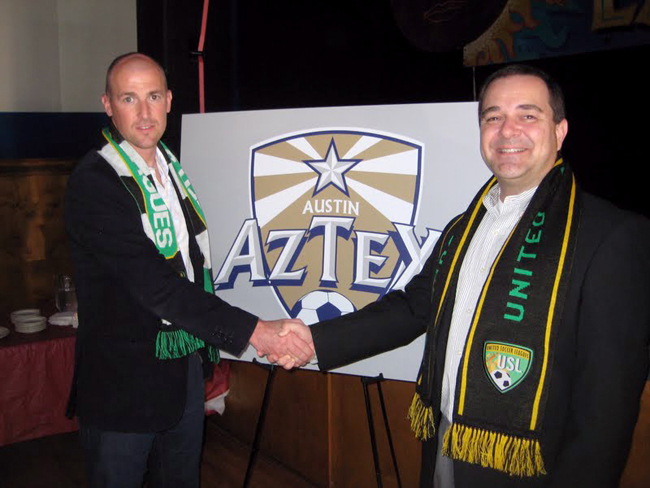 Soccer will return to Texas' Capitol this summer after a previous partial owner of the Austin Aztex founded a new Aztex soccer club for Austinites.

The original Austin team, circa 2008-2010, left to play in Orlando, leaving a gaping hole for soccer fans in the city. David Markley, who was the previous minority owner, is now the majority owner and is planning to make sure soccer in Austin is here to stay.

Like the previous Aztex team, the new squad will compete initially in the Premier Development League (PDL), meaning the club will be comprised primarily of players who are from the local area or play collegiate level soccer. The team will compete at an amateur level and players will not be paid in accordance to NCAA rules, which do not allow student-athletes to hold onto their scholarship and receive payment for playing their sport.

With the club starting off as an amateur squad, it is possible for UT students who are interested in playing soccer to make the team. Tryouts will be held in March under the watchful eye of manager Paul Dalglish.

If the name Dalglish rings a bell for soccer fans, it is probably because of his father Kenny Dalglish, who manages the famous club, Liverpool FC. Kenny Dalglish ended his legendary playing career with Liverpool in 1990. Fans may also recall Paul from his playing days with the Houston Dynamo, where he helped that club win consecutive MLS Cups in 2006 and 2007.

While fans of soccer in Austin might understandably be wary of a new team because of what happened with the first Aztex club, Markley has said this is ‘Austin's team’ and is focused on creating a team for talented local players.

“For starters, I am just a fan and I live in Austin, so my interest in bringing a team to Austin was partly so my friends and I could have a place to watch high quality soccer,” Markley said. “As I really got to know players locally, I realized there was a lot of talent here. Realizing the number of local players we have that are talented, I wanted to create an opportunity for those players to be able to play their way up to the professional ranks.”

The previous Austin club had a history of helping talented young soccer players find their way to the next level, including 21 of the players who played on the under-23 squad from 2008-2009 moving on to professional rosters, including the top level of soccer. Former Aztex players, Austin da Luz (DC United) and Matt Gold (Toronto FC) play for Major League Soccer clubs, and ex-Aztex player Euan Holden (Stockport County) competes abroad in Europe.

Obviously, the new Aztex team will want to emulate what the previous side was able to do as far as generating player talent. Paul Dalglish, the Aztex manager, who previously had a stint coaching professionally in Tampa Bay, plans on using his familiarity of playing soccer at the highest level in England, Scotland and America to help his players turn into professionals.

“My experience as a player does not necessarily make me a good coach, but it means you understand what it takes to get to the top,” Paul Dalglish said. “That is something that hopefully we will be trying to pass on to our players: that knowledge of what is required and hopefully some of the players in the future will get to where I got to, and hopefully higher.”

In Paul Dalglish, the Aztex have a manager who wants to create a Barcelona-esque possession style of attack that is enjoyable for anyone observing from the stands. Born in Glasgow, Scotland, he will be part of the melting pot of Austin and soccer the Aztex want to be considered as a staple of their organization.

That diversity is something Arch Bell, a local freelance soccer writer working for ESPN.com and host of a local bilingual soccer show called Futbol En Vivo on 91.7 FM, has suggested that the previous Aztex team failed to do.

“I think first and foremost what is imperative is that they reach out to the Hispanic community in town,” Bell said. “That is something the previous Aztex failed to do, and really engaging with Jorge Iturralde, who does the sports on Telemundo. He also has a show on Club Deportes on 92.5 FM, which is ESPN Deportes, and he has a very good following and a lot of listeners and a good base there.”

The new Aztex club is already making an effort to reach out to the Hispanic community in Austin. Their website is in English and Spanish, and the possession style of play Paul Dalglish wants to engage in is Latin-based. The only thing left is identifying local Hispanic players to play for the club.

Markley is also looking to create diversity within the soccer organization as well by including multiple ethnicities in key, decision-making positions on the team's staff.

“One thing we are tying to do very intentionally is make it very accessible to a broad demographic,” Markley said. “We really do not want to have all players form one club or all one style of player. Austin is a melting pot and I want it to be reflected on the field. It is going to be reflected that way both in our coaching staff and in our players.”

The PDL team is heading in the right direction to echo a multiplicity of races. A local supporters group, Eberly's Army, is part of the variety of soccer fans and they are happy to have soccer back in Austin.

“It means a lot. It is something that after the previous Aztex left for Orlando, we did not think we would get a team to support back in Austin this quickly,” said Matthew Gray, ‘the Gaffer’ of Eberly's Army. “In fact, many of us felt like it would be many years before anybody was willing to invest not only the time but the money to put a team here so soon.”

Markley quickly changed that and he will make the dreams of Eberly's Army and other soccer fans come true a lot sooner than they thought when the Aztex play their first game home game in mid-May.

Printed on Wednesday, January 25, 2012 as: Aztex's return brings soccer back to Austin