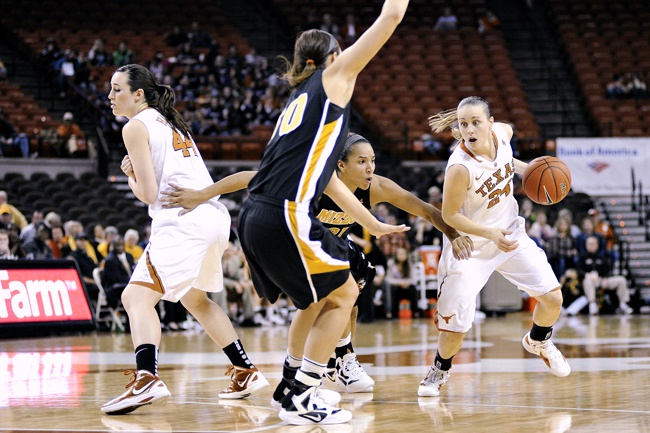 Chassidy Fussell (24) looks to drive past an outstretched Tiger defender. Fussell notched 22 points to lead all scorers in this contest.

After struggling to find their rhythm in Norman, the Longhorn guards were not about to be outplayed at home on Wednesday night.

The Texas backcourt combined to score 54 of the team’s 75 points while committing only seven turnovers en route to a 75-58 victory over the Missouri Tigers.

“I thought our guards were very determined,” said head coach Gail Goestenkors. “That’s what you want to see from your team and your guards in particular. They have the ball in their hands a lot of the time and they set the tone. When they play with that kind of focus, we’re going to have a good game.”

Sophomore standout Chassidy Fussell led all scorers with 22 points on eight of 12 shooting. It was Fussell’s 17th double-digit showing in 19 games this year and the seventh time this season that the second-year guard has scored more than 20 points.

“I thought Chassidy put the nail in the coffin for us,” Goestenkors said. “Her back-to-back buckets down the stretch sealed the win for us.”

Senior point guard Yvonne Anderson, who is averaging 15.7 points per game in the team’s last three outings, continued to show great poise while running the offense.

Anderson tied her season high with six rebounds to go with 18 points and six assists in
the contest.

“Yvonne knows that when other people are hitting she has to get them the ball,” Goestenkors said. “But she also understands that there are times when she needs to be one of our top scorers.

She’s done a great job of accepting and understanding her role on this team.”

Leading by only five after a rough first half, Goestenkors lit up her team’s locker room with a fiery half-time speech that proved to be just what the Longhorns needed as motivation for a strong second half.

“It was a mix of coach G’s pep talk and us not wanting to give them much help,” Anderson said. “We’ve had games where we’ve struggled to put away teams and the result hasn’t been what we wanted. Tonight we wanted to put it away and give ourselves a chance to have fun out there.”

Missouri’s second year head coach Robin Pingeton knew how dominant the Texas guards could be, but found them to be better than advertised.

“We’ve never question their ability,” Pingeton said. “They’ve got some tremendous perimeter players with high basketball IQ, discipline, poise and the ability to attack off the dribble.”