Texas surges to victory in second half 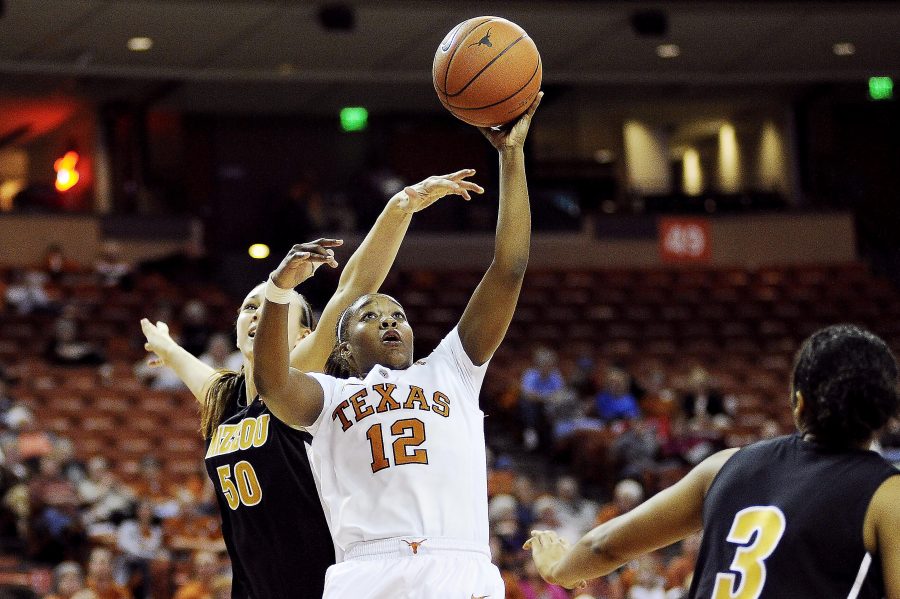 Texas guard Yvonne Anderson reaches to pull down a free ball. Anderson pulled down a season high six rebounds to go along with her 18 points and six assists. She has played veteran basketball in her last three contests where she averaged 15.7 points a game, and yesterday she helped the guards emerge from a bit of a slump.

At last Texas was able to enforce its will on an opponent, defeating the Missouri Tigers 75-58 Wednesday night. Stout defense and timely shooting allowed the Longhorns to defeat the Tigers, who now sit at 0-7 in conference play. With the win, Texas moves to 12-0 against Missouri in games played in the Frank Erwin Center.

“I was really pleased with the way we came out,” said head coach Gail Goestenkors. “I thought we were very aggressive attacking the basket both offensively and defensively. Our hard work and the lessons we’re learning are starting to pay off. It was a huge win.”

After jumping to a quick 11-0 lead, the Longhorns controlled the tempo of the first half. At two different times in the opening half Texas lead by as many as 17 points, but the Tigers didn’t go away that easily. In the final six minutes of the first half the Tigers mounted a 16-4 run and trailed 39-35 at the intermission. The Tigers’ comeback was fueled by stellar shooting from beyond the 3-point arc. Of their seven made 3-point baskets, six came in the first half.

At halftime, Goestenkors let the team know her displeasure with their play in the final minutes of the first half.

The Longhorns shot the ball very well from the start of the game and finished the night shooting 47-percent from the field. Leading the Longhorns in scoring once again was sophomore Chassidy Fussell. Seven of her game-high 22 points came in the second half, which is when Texas started to pull away from the Tigers for good. Fussell also pulled down six rebounds and was a perfect 4-of-4 from the free-throw line.

Chipping in with 18 points of her own was senior guard Yvonne Anderson. She also dished out six assists against just two turnovers. Anderson was also flawless from the free-throw line, connecting on each of her three attempts. For the game the Longhorns were 10-13 from the charity stripe.

“We wanted to have a game where we can have fun and weren’t sweating it out to the last minute,” Anderson said. “Doing the little things is really important, especially to give us momentum going into Lubbock, where it’s going to be tough.”