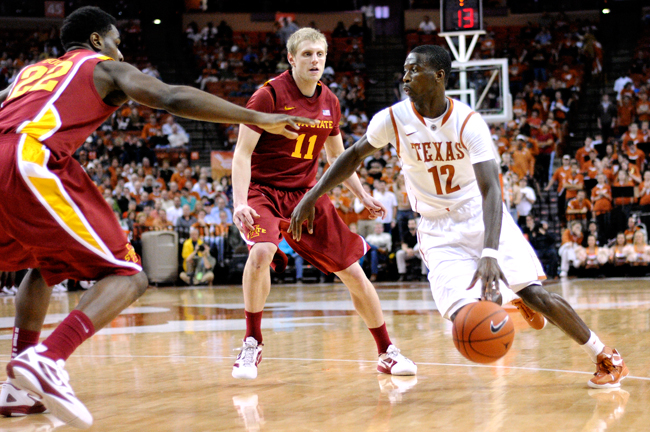 Lawrence Peart | Daily Texan Staff Myck Kabongo led Texas with 13 points during Texas win over Iowa State on Tuesday. He and the other young Longhorns face a tough opponent in Baylor and will need to focus on transition defense in order to contain the 24th best scoring team in the country.

Texas’ key players played their most influential game against Iowa State Tuesday night, and it will take an even better effort tomorrow against the third ranked team in the country, Baylor, to avoid their fourth loss in five games.

The Longhorns (13-7; 3-4 Big 12) are coming off a scrappy victory against the Cyclones, where freshman guards Myck Kabongo and Julien Lewis contributed 13 and 12 points respectively. More importantly, they weren’t the only players in on the act. Every Texas player added to the scoreboard to help take the burden off of J’Covan Brown, who was nursing a broken shot all night. He ended up with 12 points that came on 3-16 shooting from the field.

“[Brown] is obviously one of our better scorers on the team, but we can’t really rely on him in that sense,” senior forward Clint Chapman said after the game. “What we talked about before the game was getting shots within our offense and that is what we did well.”

But against Baylor (18-2; 5-2 Big 12), the 24th best scoring team in the country and the best in the conference, it is going to take all of Texas’ scorers clicking to keep up, something it hasn’t been able to achieve in conference play thus far. Texas head coach Rick Barnes wants to take lessons he learned from the Cyclones game and focus on playing offense as a means to setting up defense.

“We start with transition defense,” Barnes said of his approach to his game plan. “But what I hoped [the players] learned tonight was that good offense will allow you to be a better transitions defensive team.”

Barnes’ offensive game plan, by extension, is Kabongo’s to orchestrate. The freshman point guard has struggled at times this season, and has yet to put together a string of consistent top notch performances. For Texas to have a chance this weekend, Kabongo will have to manage the tempo of the game without getting flustered, something he was able to do — for the most part — against the Cyclones.

“Overall I thought Myck [Kabongo] did a good job managing the floor,” Barnes said. “He made some good decisions, but he’s got to make better decisions in the open-court.”

Texas trails the Bears in most other statistical categories, which is to be expected of a young rebuilding team. Baylor leads the conference in 3-point field goal percentage, assists and steals just to name a few. And the Bears do it with a roster chock-full of talent.

Defensively then, Texas will have to contain Baylor’s all-rounder Perry Jones III. The 6-foot-11 forward-center averages 14 points and seven rebounds a game. He is dangerous because he can play all over the floor despite his size, and isn’t afraid to pull the trigger on a three every now and then.

Another player the Longhorns will have to keep an eye on is freshman Quincy Miller. Miller suffered an ACL injury in high school and basically sat out his senior year before coming to college. But the setback hasn’t slowed him down. Miller scored 29 points against No. 10 Missouri in the Bear’s loss.

“[Miller] is definitely just starting to hit his stride, and he is showing everybody what he is capable of doing,” Baylor head coach Scott Drew said.

For Texas to pull out the upset, stopping these key players and getting its own role players involved offensively is essential. The Longhorns have won 51 of the last 62 meetings between the two schools dating back to the 1982-83 season, but the Bears are good enough to make the history irrelevant this year.