Barnes pleads for commitment from players 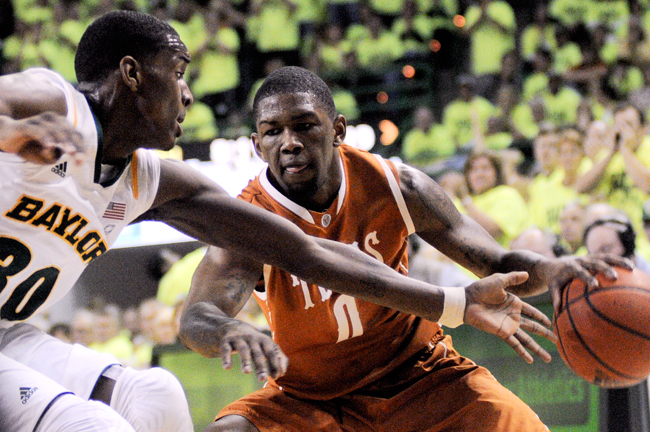 Julien Lewis drives past a Baylor defender. Lewis played the second-most minutes for the Longhorns.

You can see it on head coach Rick Barnes’ and J’Covan Brown’s faces when they walk in for the post-game press conference. The frustration from another loss sets in and they may have private answers, but no public explanations for why this team just can’t finish. One thing is for sure — it starts with commitment.

“You talk about commitment, and to me commitment is going above and beyond. It’s not doing what is expected,” Barnes said. “We just aren’t getting that from everybody.”

It’s a term thrown out a lot by coaches in these things. “Commitment” is as commonplace a word for coaches to use such as “execute,” or “giving it 110 percent.” They are meaningless filler words, and generally add little value to the proper discourse of post-game discussion. But Barnes really meant it Saturday after UT’s 76-71 defeat at Baylor. He went as far as he could without calling individual players out. It was as honest — and stern — a plea for a fully committed squad as I had ever witnessed a coach express.

“I think the biggest thing is consistency with everybody,” Barnes said. “We need everybody on our team, and we need guys where we know what we are going to get every single night. That is what we still don’t have.”

“We want to win these games. But the fact is that in some situations that you aren’t going to win it until guys understand every day the importance of practice. You aren’t just going to change habits in a game. It’s practice habits that you just have to develop. It’s just not a game-day thing. I’ve never seen a guy put on a game-face or just ‘flip-the-switch’ on game-day.”

Poor practice habits? There is something gone awry behind closed doors of the Texas practice facility, and it sounds like it’s a matter of buying into the program. Barnes has rewarded players for minutes on the floor this season that haven’t contributed much to the stat box, but have stepped up and fundamentally performed all the less glamorous parts of the game.

Julien Lewis had six points, six rebounds and four steals against Baylor, but he played 35 minutes, the most after Brown. Lewis only averages eight points a game, but he’s seen his playing time increase over the last three contests against top Big 12 squads.

“We got a couple of guys doing it and it won’t show up in the statistics, but we’ve still got to have everybody,” Barnes said.

Brown is frustrated too, and he should be. He scored 32 points, only 10 points shy of the entire team’s output together in the second half. He has shot the ball almost 22 times a contest over the last five, and though he can spark fire when he wants to, Brown can’t be called upon to shoulder the bulk of the scoring burden that often. On average, he’s only made about eight of those 22 shots a contest. But because he is one of those guys that buy into, not only the Texas program, but the game of basketball in general, Brown’s frustrations manifest themselves as a personal failure.

Commitment and consistency are not two things you think of a major Texas athletic program lacking. With the amount of money the athletics department rakes in and with the recruiting staff it has in place, bringing the best players to the 40 Acres should be a cinch. That isn’t to say there won’t be down years, but hearing Barnes say things like “more effort” and “consistency” this deep into the season is alarming.

He’ll refuse to answer any questions in the post-game that have to do with the youth of the Texas team.

“It’s not a factor anymore,” he said Saturday, and has echoed this answer on a number of occasions when the topic is brought up.

I think he’s got it right. At one point in the year, it was still kosher for Barnes to attribute the team’s inefficiencies to age, but he has been too good a coach at Texas to admit that something like a young squad is unraveling his overall work of the last 14 seasons. He also has a team that has proven that even in its most tumultuous games, it can hang with most experienced power houses.

Now, all he knows is that he doesn’t know what he’s getting from his players every night. Call it a philosophical crisis, or simply call it what Barnes seems to be saying it is — a lack of dedication from certain players that is hurting a potentially brilliant team.