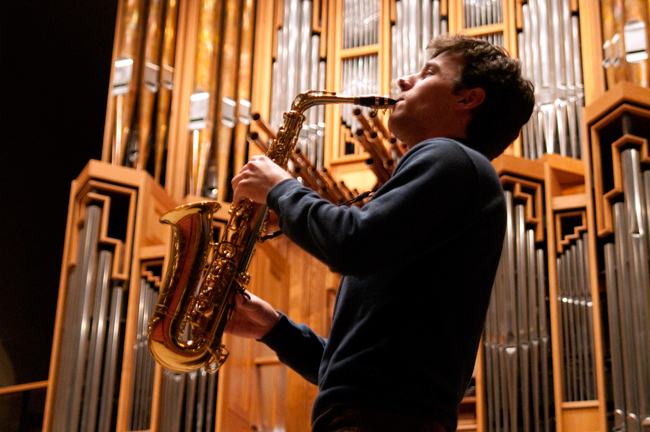 Walter Nichols, a senior composition major, began playing the saxophone when he was 11 years old. One of only a few composition majors in the Butler School of Music, Nichols must create his own pieces and be highly proficient at at least one instrument.

We live in a society where the word “saxophone” immediately triggers you to hum the tune of George Michael’s “Careless Whisper.”

Music composition senior Walter Nichols would like to prove there is more to the saxophone than that catchy song. One of the few composition students at UT, Nichols has been playing the saxophone since he was 11 years old and is currently preparing for his senior recital. The recital will showcase the music he has written throughout the three years he has spent at UT. Acceptance into the UT composition program is difficult to gain, as students must not only submit their own original compositions, but also must excel at playing at least one instrument.

The story of how Nichols got his start is a simple one. After making the decision to join the middle school band, Nichols was asked to try out the mouthpieces of different wind instruments. He did well on the saxophone, and thus it all began.

“Pretty soon after that, I went ahead and started taking saxophone lessons the summer before middle school,” Nichols said. “It came naturally, so instead of placing me in beginner band, they put me in the top band.”

After graduation, Nichols attended Berklee College of Music, where he learned about jazz theory. Although he enjoyed living in Boston, Nichols was looking for a program more classically oriented.

The University of Texas’ Butler School of Music offered just the program he was looking for.

Nichols quickly found his place at UT. He joined Tex Sax, UT’s saxophone ensemble, and he sings with Ransom Notes, a pop a cappella group. UT has given him the opportunity to work with a variety of great composers such as Yevgeniy Sharlat, Donald Grantham, Dan Welcher and Bruce Pennycook.

Nichol’s saxophone professor, Harvey Pittel, has only positive things to say about his student.

“He’s a star saxophone performer as well as a great young composer, which is really rare,” Pittel said. “He works very hard when I give him assignments to learn each week, he practices. I mean, he really works.”

Nichols has found that it takes him awhile to even begin to write music. It all begins with inspiration. Inspired by anything from poetry he reads to the mood he is in, Nichols works hard to convey his feelings in a musical form.

“Many an all-nighter has been pulled sitting in front of my piano,” Nichols said. “I usually start off with a broad sense of what I’m trying to say, and then I just go from there.”

The hard work will show at Nichols’ senior recital. Along with composing the music, Nichols will also be choosing who plays the pieces. The half hour recital will consist of a set of eight piano preludes, a song cycle for a baritone singer, piano and tenor saxophone, as well as a three movement Latin-inspired piece.

Music performance senior Andy Wilds has played with Nichols in Tex Sax and is excited to hear Nichols’ compositions.

“Walter is always cool to play with because you don’t have to worry about him doing anything wrong,” Wilds said. “I haven’t heard the music he has written yet, but I’m sure that it’s going to be great.”

This recital certainly allows Nichols to leave UT with a bang.

Pittel has high hopes for Nichols’ future. He believes Nichols would prosper in the academic field as a composition or saxophone professor. He also believes Nichols could end up scoring major Hollywood movies.

“In Walter’s case when he came to UT he was great, and he’s still great,” Pittel said. “He’s always been good. If I could draw a halo, I’d draw one.”