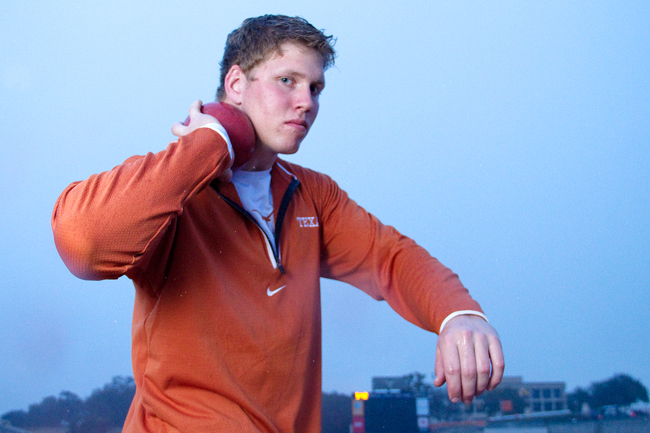 On meet days, freshman thrower Ryan Crouser washes his shoes and weight belt and carefully re-inscribes his name on his discus. Then, sometimes, he gulps down a 64-ounce bottle of orange juice.

“It started at the state meet my freshman year,” Oregon native Crouser said of the orange juice ritual. “I was really nervous, and I had a 64-ounce bottle of orange juice at the hotel. I would take a sip of it subconsciously, and I drank the whole thing, 64 ounces in 30 minutes.”

“I felt really good,” he said. “I guess some of it might have been the orange juice. And then I kind of just got into an orange juice routine.”

Crouser, who competes in shot put and discus, was the No. 1 recruit in the nation, Track & Field News Athlete of the Year and part of UT’s top-ranked men’s track and field freshman class.

The sport runs in Crouser’s blood — his grandfather was the U.S. Army national champion of javelin in the 1950s, and his dad threw for the University of Idaho.

One of his uncles competed as a thrower in the Olympics, the other holds University of Oregon’s record in shot put and discus, and two of his cousins are both record-holding throwers.

Despite his place amidst a pedigree of track talent, Crouser said he wasn’t pushed into track by family members, although they did offer some initial encouragement.

“They just told me to give it a try, so I did and I just really liked it,” he said.

Crouser played a multitude of sports as a child but said he cut back in high school to focus on basketball and track.

Despite his success, the course of Crouser’s high school career wasn’t always a smooth ride; he suffered a major foot injury his junior year, resulting in surgery and several months of rehabilitation, during which he was unable to compete.

Crouser said the timing of the injury, during prime college recruiting season, made it all the more difficult.

“It was tough because my junior year I made a really big jump. I was throwing my lifetime best in practice,” he said. “To lose an entire year’s worth of progress was really frustrating. It was nerve-racking not knowing if the college coaches would stay with me.”

Although he wasn’t throwing for several months, those coaches didn’t forget about his remarkable talent. Crouser had offers from Oregon, ASU, UCLA, Stanford and Texas and said he didn’t have his heart set on any particular school.

“A big thing for me was academics. I want to go into mechanical engineering, and Oregon is a liberal arts school,” he said. “Texas and Stanford both have really competitive engineering programs, and I felt like Texas was really well balanced between academics and athletics.”

Despite Austin’s distance from his hometown, Crouser said the adjustment hasn’t been too difficult.

“I really like it down here. It’s a really great city,” he said. “I’ve never lived in a big city before, but all of the people are really nice. It’s a great community that supports the University.”

Crouser also said the team mentality was something that set Texas apart.

“There’s a team feeling here — we help support each other, both when we’re training and outside,” he said. “It’s a really close group that I didn’t see at other schools so much, and we’re one of the best in the nation as a group of throwers.”

Workouts with the other throwers keep Crouser motivated to perform his best, he said.

“Every day it’s really competitive, so that makes it a lot more fun,” he said. “If you’re having an off day, they’re definitely not going to rub it in your face, but they’re going to let you know you’re not throwing as good as you could be.”

Associate head coach Mario Sategna said while expectations for Crouser are high, he isn’t carrying the weight of the team on his shoulders in his first year of college athletics.

“He came in with the most extensive background of any throwers I’ve ever had, and that’s very refreshing,” Sategna said. “But I think it’s unfair to expect any freshman to walk away with various titles. That takes time.”

On Saturday, Crouser will compete at the Arkansas Invitational in Fayetteville where he executed a top throw in shot put at a duel meet two weeks ago.

“This meet is a 10-team invitational, and you’re going head-to-head with the nation’s best,” Sategna said. “So these guys are looking forward to that.”

He likely won’t forget to buy a bottle of orange juice.