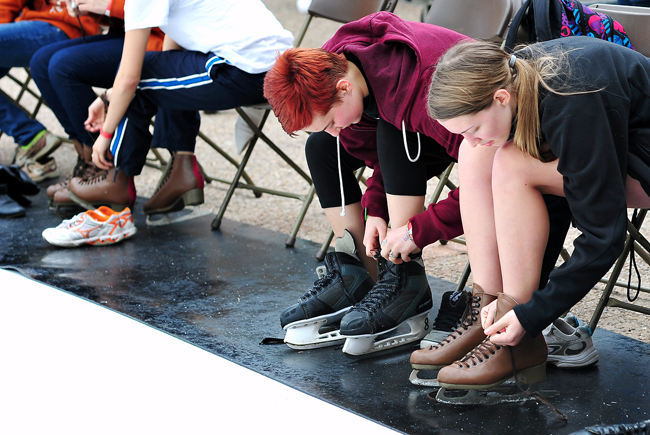 Students put on skates before entering the makeshift ice-rink outside of Gregory Gym as part of Winter Wonderland, put on by the Student Events Center, Monday afternoon.

Despite the 75 degree weather, students got a glimpse of colder climates at the Student Events Center’s Winter Wonderland.

The Winter Wonderland, hosted at the entrance of Gregory Gym Monday, offered free cookies, hot chocolate and an opportunity to ice skate as a way to welcome students back to campus.

The event cost a total of $6,000, $5,000 of which went towards the ice skating rink, said Marguerite Elliott, assistant director for student programming at University Unions. Cameron Allison, rhetoric and writing senior and president of the SEC, said approximately 400 students attended the event.

“We wanted to have an event to welcome back both returning students as well as transfer students into the semester,” Allison said.

Because an ice skating rink would not survive the hot Texas sun, the rink was made out of synthetic silicon and had a wet slippery surface, Allison said. Once the skaters began to slide on the surface, friction between the skates and surface created the feeling of a real ice skating rink, he said. Students had to sign wavers before stepping foot on the “ice.”

Allison said he hopes to continue having more events like this one to motivate students to stay connected to campus.

“People were smiling and our volunteers also all got the opportunity to skate and had a great time,” he said.

Whether students stepped on the ice or helped themselves to a warm drink, the event was a success, Allison said.

Sumaiya Syed, Asian cultures and languages and chemistry junior, said she is from the Midwest, so she knows what winter actually feels like.

“The skating rink felt like cardboard, not ice, which is smooth,” Syed said. “But it was still really enjoyable.”

Nursing sophomore Hillary Camp was one of the first people brave enough to enter the rink. “It’s a party here,” she said.

“I am glad I came. Events like this really give students a sense of community,” Camp said. “It was like the North Pole, just without the cold.”

Psychology freshman Jessica Jakobeit said the the faux ice felt safer to her than real ice while still giving a real sensation.

“I have been deprived of winter in Texas, but this event definitely helped,” Jakobeit said.