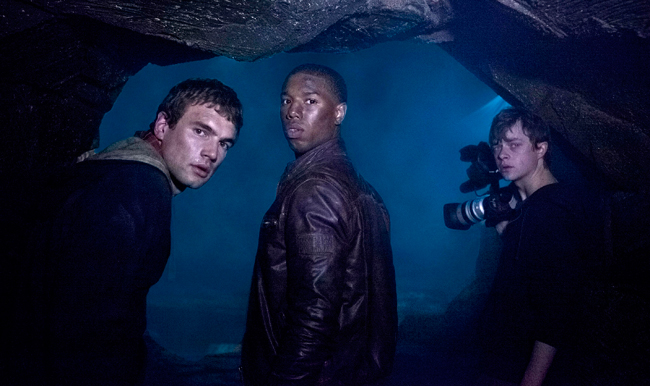 There’s no denying that the found-footage genre is beginning to wear thin. When the genre was getting off the ground, many of the best horror films of their respective years were heralded as examples, including “Paranormal Activity” and “Cloverfield,” but now it’s become cluttered with the likes of “Apollo 18” and “The Devil Inside,” the former being a frequent mention on 2011 worst-of lists. The latter seems destined for the same fate this year. However, “Chronicle” is a smart, innovative take on the genre, telling a story that’s compelling in its own right and even testing the boundaries of what a found-footage film can be.

“Chronicle” is set up like your average superhero origin story: Andrew Detmer (Dane DeHaan) lives in a run-down house with a sickly mother and a drunken father. His only friend is his cousin Matt (Alex Russell). Andrew buys a camera to put a lens between himself and his slog of a life, but quickly finds himself roped into checking out a mysterious hole in the ground with Matt and the popular, charming Steve (Michael B. Jordan). When the trio emerges from the cavern they’ve discovered, they find themselves getting frequent nosebleeds but also able to move things with their mind.

Found-footage films often rely on shaky cam, frantic off-screen narration and people constantly addressing the camera, and “Chronicle” is certainly guilty of these in its opening scenes. However, as the characters (particularly Andrew) get more confident in their powers, the camera no longer requires an operator and floats through scenes, simply recording. It’s a brilliant twist on the found-footage genre, and just one of several innovations director Josh Trank employs.

The screenplay by Max Landis (son of legendary horror director John Landis) doesn’t go exactly where you’d expect it to and poses an interesting question: what happens when a kid who has been beaten down by life at every corner and has never had a positive role model becomes the most powerful person in the room? And what happens when that kid realizes he can do whatever he wants with absolutely no consequences? The heroes here aren’t the wholesome figures of Marvel lore. As the teens become more confident, they start off playing pranks with their powers before things take a resolutely darker turn, which is where many of the film’s bigger problems come in.

While the rise and fall of our central trio is certainly compelling to watch, many of the plot machinations it takes to get us to the inevitable final battle feel stale or forced. Also, every bit of clever subtext the film tries to handle is fumbled by dialogue that quickly and clearly shines a spotlight at any thematic subtleties. While the characters themselves are often well-written and feel like real teenagers, their actions aren’t always realistic, often veering towards the over-dramatic or simply nonsensical.

Thankfully, the actors portraying them all give strong, likeable performances. DeHaan is given much of the film’s heavier material and pulls it off with grace. Co-star Alex Russell is charming and very convincing in the numerous scenes where “Chronicle” asks him to play drunk, and Michael B. Jordan gives perhaps the most human, well-rounded performance in the film, filled with excitement and hope and even a little bit of fear at what he can do.

“Chronicle” reportedly had a budget of only $15 million, but that doesn’t show in the film. The effects are consistently impressive and never showy; the scene where our heroes learn they can fly is a highlight of the film, their infectious enthusiasm making it hard not to smile as they soar above the clouds, dodging planes and constantly challenging each other to go higher.

All of the young voices involved with “Chronicle” (Trank, Landis, DeHaan and Jordan) have a clear, bright future ahead of them, and “Chronicle” displays each of their talents mixed with an unexpectedly human, intelligent take on the tired found-footage genre.