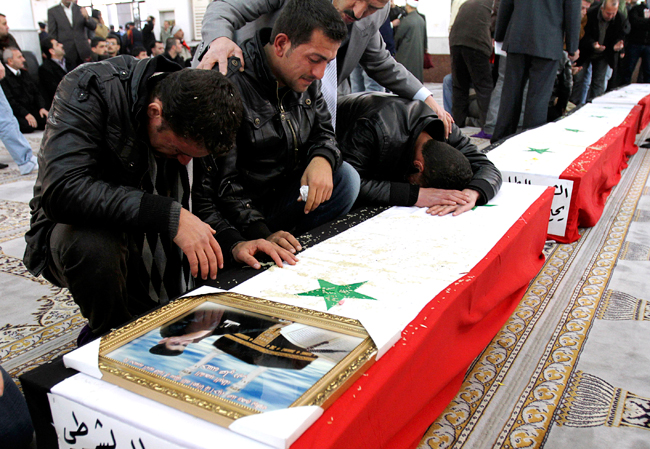 Syrian men mourn over the coffin of one of 11 Syrian police officers killed in an explosion on Friday.

BEIRUT — Thirty years ago Thursday, Syria’s regime launched a withering assault on the rebellious city of Hama, leveling entire neighborhoods and killing thousands in one of the most notorious massacres in the modern Middle East.

Today Syria is in the throes of a new rebellion and Hama stands as both a rallying cry for those trying for nearly 11 months to topple the regime and a dreadful warning of what the ruling Assad family is capable of doing to survive.

The entire city of 850,000 in the plains of central Syria shut down Thursday as residents observed a strike marking the anniversary.

Hundreds of troops and security forces flooded the streets, closing off public squares and setting up checkpoints to thwart planned protests in the city, which has been one of the centers of the past year’s uprising against the rule of President Bashar Assad.

Abu Anas, an engineer from the city, says the Hama massacre, carried out by Bashar’s father and predecessor Hafez Assad, has been seared into the psyche of every Syrian. The name Hama has become equivalent to the word massacre.

“The stories have been passed on from the old generation to the new. Almost everyone in Hama today has an uncle, a grandfather or a brother who died or went missing. There is bitterness to this day,” said Abu Anas, who asked to be identified by his nickname for fear of retaliation.

Amnesty International has estimated that between 10,000 and 25,000 people were killed in the 1982 siege, though conflicting figures exist and the Syrian government has never made an official estimate.

Abu Anas was a 25-year-old engineering student when, on the night of Feb. 2-3, 1982, the Syrian military began its assault to crush an uprising against Hafez Assad by the Muslim Brotherhood.

In a scorched-earth campaign commanded by Assad’s brother Rifaat, troops surrounded the city, sealing it off, then swarmed in. For three weeks, they blasted it with tanks and artillery, battled with Brotherhood fighters and systematically leveled parts of the city.

After three weeks, entire neighborhoods had simply disappeared, the rubble hastily covered over afterward with concrete.
Throughout, nobody knew what was unfolding inside the sealed city. By the time the first journalists arrived, the bodies had largely been buried.