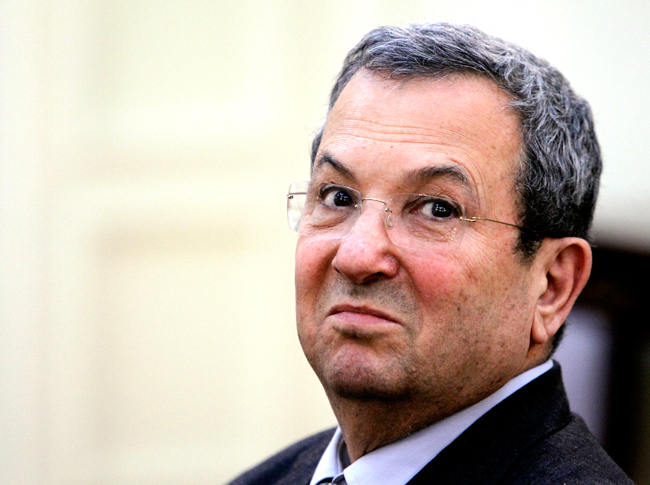 Israeli Defense Minister Ehud Barak is seen during a meeting in Athens on Wednesday, where Israel has been bolstering alliances.

Earlier in the day, officials gathered at a strategy conference in this posh seaside suburb asserted that Iran has already produced enough enriched uranium to eventually build four rudimentary nuclear bombs and was even developing missiles capable of reaching the U.S.

In perhaps the most startling instance of saber-rattling, Vice Premier Moshe Yaalon, who heads the strategic affairs ministry and is a former commander of the military, said all of Iran’s nuclear installations are vulnerable to military strikes.

Much of the attention focused on the heightened sanctions imposed on Iran by Europe and the United States.

Earlier this week, the Associated Press reported that officials in Israel — all of whom spoke anonymously because they were not authorized to discuss Iran — were concerned that the measures, while welcome, were constraining Israel in its ability to act because the world expected the effort to be given a chance.

Barak appeared to confirm this, suggesting that the sanctions needed to be given a chance to work. But he also said there was a growing sense around the world that failure would in effect justify military action.

“There is no argument about the intolerable danger a nuclear Iran (would pose) to the future of the Middle East, the security of Israel and to the economic and security stability of the entire world,” Barak said.

Israel has been a leading voice in calls to curb Iran’s suspected nuclear weapons program, and the latest revelations could help generate further international support for moves against the Iranian regime. At the same time, there is growing international concern about a possible Israeli rogue attack on Iranian nuclear installations.

Iran denies it’s trying to develop nuclear weapons, insisting it seeks nuclear power for nonmilitary uses. The International Atomic Energy Agency has said that some of Iran’s alleged experiments can have no purpose other than developing nuclear weapons.

U.N. chief Ban Ki-moon, who gave the final speech at the Herzliya conference, has said it’s the responsibility of Iran to prove it is not pursuing nuclear weapons. “I believe they have not yet done so,” he said after a meeting with Israel’s prime minister in Jerusalem on Wednesday.

Israel’s military intelligence chief, Maj. Gen. Aviv Kochavi, said Iran is undeterred. “Iran keeps advancing its capabilities, keeps developing its very ambitious nuclear program, at the basis of which is to get nuclear power,” Kochavi said at the conference.

In his presentation, Yaalon said Iran is trying to develop missiles with a range of 6,250 miles (10,000 kilometers), or enough to strike the US, and has already produced enough enriched uranium to eventually build four rudimentary nuclear bombs. Yaalon said Iran’s attempt to develop 6,250-mile missiles became apparent in the aftermath of a mysterious explosion several months ago at what he described as a missile research and development site in Iran. The cause of the blast remains unknown, and Yaalon did not elaborate.

Iran insists the blast was accidental, but speculation over sabotage remains strong. The remarks by Yaalon appeared to be the first public suggestion that the missile site was the scene of highly advanced projects and could boost suspicions that outside forces played a role in the explosion.

Israeli officials have said privately that Israel must act by summer if it wants to effectively attack Iran’s program. They have said a window of opportunity is closing because Tehran is moving more of its installations underground.

Yaalon played down such concerns, suggesting that forces guarding the nuclear installations could be targeted. Referring to the debate over bunker-buster bombs, he said that “at the end of the day it’s possible to strike all the installations.”

An Iranian counterstrike at Israel is seen as likely if Tehran’s nuclear installations are attacked.

Kochavi said Israel’s enemies have about 200,000 rockets and missiles that could strike Israel. Most have a range of about 25 miles, but several thousand have a range of several hundred miles (kilometers), he said.

Iranian proxies in the region, mainly Gaza’s Islamic militant Hamas and the Lebanese Hezbollah, have fired thousands of rockets into Israel and have been building up their arsenals in recent years.