Aggies haven’t lived up to expectations 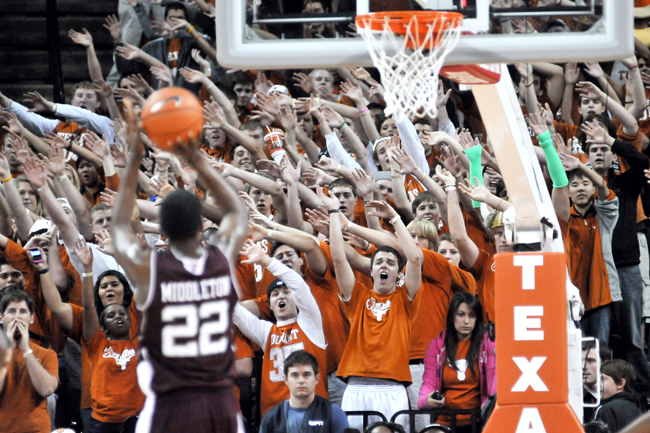 Texas A&Ms Khris Middleton (22) lines up a free throw in front of the O-Zone, Texas student section. The Aggies and Longhorns have had a number of memorable battles this last decade, and tonight might be the last.

That story hasn't played out that way for Texas A&M's basketball program — the football team suffered a similar fate, too. The Aggies were ranked No. 20 in the preseason polls and some picked them to finish at the top, if not the outright champion of the Big 12. That was a long 13 weeks ago, and now the Aggies' weaknesses have dropped them out of the rankings and into obscurity. They are currently second to last in the conference standings and are in the middle of a two-game slide.

Texas coach Rick Barnes has seen this rivalry grow by leaps and bounds in the last 14 years, so he knows that trends and statistics mean little coming into this game.

“I've seen a lot in my 14 years here. When I first came there was no emphasis on basketball at [Texas A&M]. But certainly in the last few years, they've made it an emphasis,” Barnes said. “There have been some great games over the last number of years. They are a team that are capable of beating anyone. I thought they fought extremely hard when [the Aggies] came here. It is going to be very physical.”

The Longhorns beat the Aggies, 61-51, in Austin on Jan. 11. But Barnes knows better than to go into this game with overconfidence. Playing at Reed Arena is one of the hardest places to compete in the Big 12, especially for Texas. The Longhorns have dropped six of their last seven in College Station.

“It is kind of hard to experience until you see for yourself,” Texas forward Clint Chapman said. “They have a lot of pride and like to show that.”

With the team playing as far to the bottom as they are, A&M's focus is likely singularly on beating Texas this one last time, and the Aggies have the skill set to do it. The Aggies came into the year with a highly-touted defense that has actually lived up to its billing. They lead the league in scoring defense, allowing just under 60 points per contest. Texas, on the other hand, ranks sixth in this category. Still, the Longhorns don’t have a huge selection of scorers to rely on, meaning the stingy Aggie defense can and will exploit this weakness.

But if Texas can find a way to move the ball within its offense, this game could spell an unhappy ending for the Aggies, just like on Thanksgiving when UT beat A&M in football, 27-25. For one reason or another, things could never gel for this basketball team. They are still learning from a new coach, Billy Kennedy, who took over in May 2011. The Aggies' stellar defense hasn’t made up for the fact their offense only averages 62.4 points a game, good for second to last in the conference. The Aggies don't have the size or the experience to put together a full game either.

Like their football brethren, Texas A&M has let poor halves define its inefficiencies. In a close one against Kansas State Saturday, the Aggies were nipping at the heels of the Wildcats but turnovers in the second half allowed Kansas State to pull away.

The Aggies have one more chance to prove that their rankings warranted some merit, and a win against a decent, albeit much better, Texas team can help begin to steer them on the right track for the rest of the season.