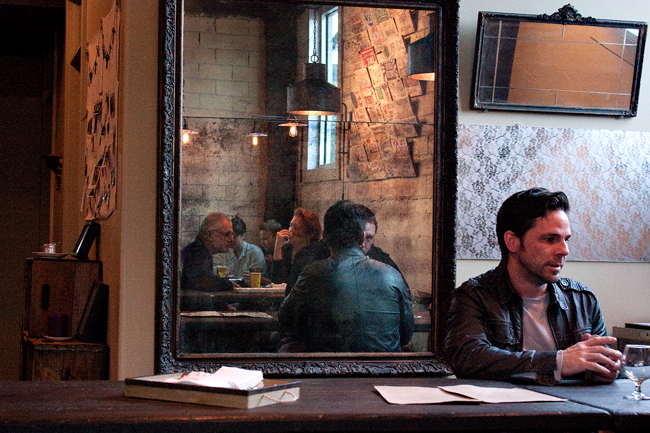 Bay Anthon, co-owner of Hopfields, talks with patrons of his restaurant, Sunday afternoon. Hopfields, which has been open for over two months, has enjoyed success since opening in late November.

Editor’s note: This story is part of a semester-long series exploring the local food scene.

In 2009, Bay and Lindsay Anthon began kicking around an idea. Bay, an avid beer drinker, loved the idea of opening a higher-end gastropub with a neighborhood feel. Three years later, he quit his job in the technology industry and opened Hopfields on 3110 Guadalupe Street, just north of the UT campus.

It’s been open for more than two months now, and Bay Anthon, co-owner of the restaurant, says that business has “surpassed our expectations.”

But opening a restaurant is not an overnight process. What went on in the three years after the idea was first sparked? The answer is a lot of hard work.

The behind-the-scenes effort that is required for starting a restaurant is not for those looking to make a quick buck.

“The process is very exhausting. It feels insurmountable,” Anthon said. “You have to think that it’s going to get done.”

Other restaurants are not as fortunate. Portabla, a bakery cafe on W. Sixth Street, closed its doors earlier this year. El Arbol, a trendy South American restaurant, closed abruptly in September last year after just two years of business, leaving 40 restaurant employees without a job. The group behind Shoreline Grill, a restaurant that sat on the shore of Lady Bird Lake for 23 years, filed for bankruptcy in August of 2010 and closed Jan. 31 of this year.

According to Scott Hentschel of the ELM Restaurant Group (owner of the acclaimed 24 Diner and the new beer garden and bakery, Easy Tiger), the major reason for the high rate of turnover in the restaurant industry is twofold. The most obvious, Hentschel said, is that new restaurants often start under-capitalized.

This initial problem “is difficult to overcome,” he said. The second reason is that “it’s the hardest business in the world. If you don’t treat it like a business, it gets away from you very quickly,” Hentschel said.

One of the complicating factors of starting a new restaurant in Austin is the permitting process. In fact, Anthon says, the only thing more difficult than dealing with the city is the swing factor, or, as he calls it, “the insurmountable unknown.”

The city of Austin requires that restaurant businesses have an operating permit, a health department review, Certificate of Occupancy, building permits in which the business must report all equipment (from vent hoods and ice cream dispensers to individual food processors and mixers), a food manager certification and, if the restaurant plans to sell alcohol, a liquor license.

The costs add up quickly, but as Anthon and Hentschel agreed, it’s not the cost of the permitting itself that is the problem.

“The delays caused by permitting are a big part of our start-up costs,” Hentschel said. In the restaurant industry, time is money and in that sense, permitting is exorbitantly expensive.

Hentschel said that to many, the opening of a restaurant “appears to be a romantic endeavor, but’s far from romantic.” So with all the barriers to entry that culinary entrepreneurs face, why even venture into the highly competitive industry?

It’s ultimately about the outcome. For Hentschel, it’s about seeing a huge plan “come together with the most creative people you can find and turning them loose.” For Anthon, it’s the manifestation of his “pure experience of 15 years of loving beer” that is the tangible return on years of tiresome work.