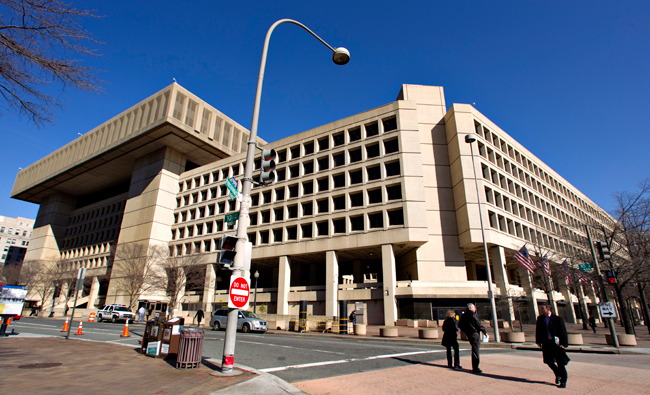 The FBI headquarters in Washington Friday. Hackers claim to have leaked a sensitive conference call between cyber crime investigators at the FBI and Scotland Yard. The hacker group Anonymous has released a roughly 15 minute-long recording of what appears to be a Jan. 17 conference call devoted to the loose-knit hacking group.

LONDON — Trading jokes and swapping leads, investigators from the FBI and Scotland Yard spent the conference call strategizing about how to bring down the hacking collective known as Anonymous. Unfortunately for the cyber sleuths, the hackers were in on the call too — and now so is the rest of the world.

Anonymous published the recording of the call on the Internet on Friday, gloating in a Twitter message that “the FBI might be curious how we’re able to continuously read their internal comms for some time now.” The humiliating coup exposed a vulnerability that might have had more serious consequences had someone else been listening in on the line.

The leak was one of a slew of Anonymous hacks that hit websites across the United States Friday, including in Boston, where the police site was defaced, and in Salt Lake City, where officials said that personal information of confidential informants and tipsters had been compromised. The hackers’ successful attempt to spy on the very people charged with tracking them down remained the most dramatic coup of the day, with sensitive police conversations broadcast across the world. The FBI said the communication “was intended for law enforcement officers only and was illegally obtained,” but added that no FBI systems were breached. It said that “a criminal investigation is under way to identify and hold accountable those responsible.”